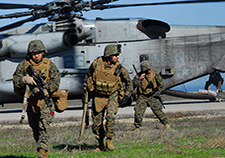 VA investigators and colleagues with the Marine Resiliency Study tested the DNA of nearly 3,500 Marines, all of whom had already been exposed to combat and some of whom had developed posttraumatic stress disorder, to see if they could link a particular gene or genetic variation to the condition. The researchers found evidence of a particular gene called PRTFDC1 as a "potential novel PTSD gene." The apparent linkage between this gene and PTSD held true across all racial and ethnic groups represented in the study. The authors note that the finding needs to be replicated in further studies.

By the same token, the study team found little association between PTSD and 25 other genes that had been suggested as potential PTSD risk factors in previous studies.

The authors note that while PRTCFDC1 may pan out as a viable PTSD gene, it is more likely that the genetic component of PTSD risk involves small effects from many different genes. This theory on how genes affect mental illness jibes with findings from recent genomic studies on other conditions. (Psychoneuroendocrinology, January 2015)