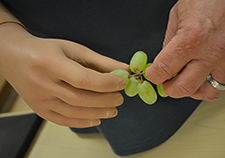 Time magazine featured VA researchers' work on an artificial hand that gives amputees a sense of touch. The story and video appeared on Time's website on Nov. 16, 2015.

The research is taking place at VA's Advanced Platform Technology Center and Case Western Reserve University and is funded by VA and the Defense Advanced Research Projects Agency (DARPA).

Time described how the device works, as demonstrated by Igor Spetic, an amputee who is testing the new system: "Sensors in the prosthetic hand measure the pressure applied to various objects as the hand closes around them. The measurements are then recorded, converted into a neural code, and sent through wires to electrodes that were surgically implanted around nerve bundles in Spetic's forearm and upper arm. When the neural code reaches Spetic's nerves, the signal is transmitted through his healthy neural pathways that weren't affected by his amputation, to his brain. The brain interprets the signals as feeling, as if from a normal hand."

Spetic, told Time that "the hope I have is that anybody that's an amputee will be able to benefit from this system."