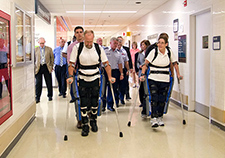 VA has agreed to pay to provide a powered exoskeleton for eligible Veterans with spinal cord injuries (SCIs).

National Public Radio (NPR) and other news outlets reported in December 2015 that the $77,000 cost of ReWalk, an Israeli technology that allows paraplegics to stand, walk, and climb stairs, will now be paid by VA for eligible Veterans with SCIs.

ReWalk is a wearable robotic exoskeleton that provides powered hip and knee motion. VA's Center for Medical Consequences of Spinal Cord Injury, located at the James J. Peters VA Medical Center in the Bronx, N.Y., has helped test the device for several years. In 2014, the FDA approved the device for sale in the United States.

Participants in these studies lost fat tissue, had improved bowel functioning, and saw their diabetes symptoms reduced. The center is continuing to study ReWalk's impact on mobility, bowel function, and cardio-metabolic health.

Dr. Ann M. Spungen, the center's associate director, was quoted by NPR as saying, "The research support and effort to provide eligible Veterans with paralysis an exoskeleton for home use is a historic move on the part of VA, because it represents a paradigm shift in the approach to rehabilitation for persons with paralysis."