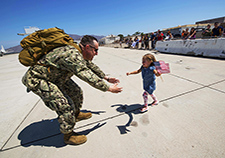 VA is among several public and private partners working with the Henry M. Jackson Foundation for the Advancement of Military Medicine on a new study aimed at learning what types of programs and services are most helpful to Veterans as they reintegrate after their military service.

The Veterans Metrics Initiative, or TVMI, will enroll 7,500 service members separating from the Army, Navy, Marine Corps, Air Force, and Reserve and National Guard units. Researchers will survey them within 90 days prior to their leaving military service and reassess them every six months for three years.

The study has three goals:

"We asked a group of scientific experts to help answer the question of how to measure what works to improve Veterans' long-term well-being outcomes," says Cynthia Gilman, a vice president at HJF and administrative lead on the study. "The DoD, VA, and civilian researchers accepted the challenge and worked collaboratively for more than two years—without compensation or funding promises—to design the TVMI study."

As part of the study, researchers are designing and testing new surveys and other means to gauge Veterans' well-being. The tools are likely to find wide use beyond TMVI itself.

"The measures being created and validated for this project reflect great leaps forward in our understanding of Veterans' needs and services over the past decade," says VA's Dr. Erin Finley, one of the study's leaders. "The resulting measures are likely to have relevance for a wide array of future research projects."