Longitudinal cohort study of Iraq War Veterans to conclude in 2016 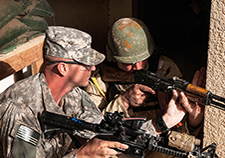 The enduring effects of war on mood and stress symptoms, thinking and reaction skills, and aspects of day-to-day life are the subject of VA Cooperative Study NO. 566, scheduled to be completed in September 2016.

The study is assessing the mental health status of Iraq War Veterans in relation to their own pre-deployment functioning. It is a follow-up to the Department of Defense's Neurocognition Deployment Health Study, which collected data on 1,595 soldiers at two military bases beginning in 2003.

The soldiers, all of whom were deployed to Iraq, were evaluated both before their deployment and within two to six months after their return from the war. A few were also assessed a year after their post-deployment assessment.

VA researchers led by Dr. Jennifer Vasterling of the VA Connecticut Health Care System have been collecting new data on NDHS participants since 2008. The research team is conducting structural clinical interviews with more than 800 participants in the NDHS study, and face-to-face individually administered neuropsychological testing with 200 of those participants.

Participants received these tests after at least five years had elapsed since their return from their first deployment.

Once the data have been fully collected, they will be compared with the previously collected NDHS data.