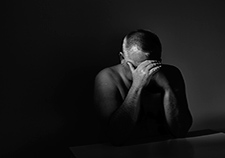 Veterans and military personnel account for one in five suicides in the U.S., according to data compiled by VA investigators. (Photo: ©iStock/furtaev)

Veterans and military personnel account for one in five suicides in the U.S., according to data compiled by VA investigators. (Photo: ©iStock/furtaev)

The accuracy of methods to identify those at increased risk for suicide, and the effectiveness of interventions to reduce suicide and self-directed violence, were the topics addressed in a November 2015 report by the ESP team at the VA Portland Health Care System.

According to the report, Veterans and military personnel represent 20 percent of all known suicides in the United States. Between 2000 and 2010, the rate of suicides among Veterans rose higher than the rate among civilians. Women Veterans are at especially high risk, relative to non-Veteran women.

The researchers reviewed previous studies on the accuracy and adverse effects of methods to identify Veterans and military personnel who are at increased risk for suicide and self-directed violence. They also looked at whether the accuracy and adverse effects of these methods varied by factors such as the setting in which they were delivered, or their specific target population.

They found that methods based on data from electronic medical records were "robust" predictors of subsequent suicide. The most relevant such study used data from nearly 6 million VA patients to create a prediction model that stratified patients according to their risk of suicide within the next year.

The investigators also looked at the effectiveness and efficacy of suicide prevention interventions in reducing suicide rates and self-directed violence. They found that in six of the eight studies they reviewed, suicide rates were lower after interventions, including studies of the Air Force Suicide Prevention Program and a program for an Army infantry division deployed to Iraq, and studies of programs implemented among police and college students, and in health systems. Suicide rates were not lower in two studies of community programs.

Finally, they looked at ongoing research and remaining evidence gaps with respect to suicide prevention in Veterans and service members, and how these gaps could be addressed by future research. They found there are many single, inconclusive studies of various risk assessment instruments and prevention interventions; that many studies had methodological deficiencies; and that there was a lack of studies addressing possible adverse effects of suicide prevention programs.

The authors suggest that future research continue to examine promising methods of determining who is at risk for possible suicide, including survey questionnaires, neuroimaging tests, and other biomarkers.

The report is currently only available through VA's intranet, but it will be submitted for journal publication in the near future.