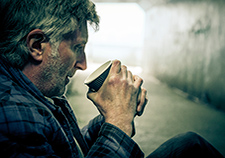 A recent VA study suggests Veterans with a history of military misconduct are at higher risk for subsequent homelessness. (Photo: ©iStock/Adam Petto)

A recent VA study suggests Veterans with a history of military misconduct are at higher risk for subsequent homelessness. (Photo: ©iStock/Adam Petto)

Iraq and Afghanistan Veterans separated from military service for reasons of misconduct were far more likely to become homeless than those who left the service under normal circumstances, according to a letter from VA researchers published in the Aug. 25, 2015, issue of the Journal of the American Medical Association.

The researchers used DoD interservice separation codes to look at the reasons for discharge of 448,290 service members who used VA for care through April 30, 2012.

While only 5.6 percent, or 24,992, of those Veterans were separated for misconduct, they represented 25.6 percent of the number of homeless Veterans in that group, and the number of those homeless increased with the time following separation.

Overall, 1 percent of the patients in the study were homeless within a year of leaving the military. For those discharged for misconduct, that figure was 5.4 percent.

Misconduct is defined as a discharge related to drugs, alcoholism, offenses against the military code of conduct, infractions of the law, and for other reasons. These Veterans did not receive dishonorable discharges from the service, which would have made them ineligible for VA health care.

According to the researchers' letter, the incidence of misconduct-related separations is increasing, at the same time as ending homelessness among Veterans is a federal government priority.

They hypothesized that military misconduct may be a proxy indicator for a variety of risk factors associated with Veterans' homelessness, including a pre-military history of criminality, adverse deployment experiences, mental health issues, alcohol and substance abuse, post-deployment financial instability, and unemployment.

They suggest VA identify Veterans with misconduct-related separations at the time they leave the service, and provide them with case management and rehabilitative service at the time of transition, in order to help keep them from becoming homeless.