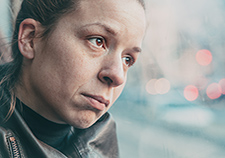 (Photo for illustrative purposes only. ©iStock/Marjan_Apostolovic)

(Photo for illustrative purposes only. ©iStock/Marjan_Apostolovic)

Researchers at the VA Salt Lake City Health Care System and VA's National Center for PTSD found Veterans who had experienced military sexual trauma are at greater risk for homelessness once they leave military service. The retrospective study results were published in the June 2016 issue of JAMA Psychiatry.

VA researchers reviewed medical data from the Department of Defense and VA belonging to 601,892 U.S. Veterans who served in Iraq or Afghanistan. They looked for signs of homelessness in Veterans 30 days, one year, and five years after leaving military service.

The study discovered 1.6 percent of Veterans who were exposed to sexual trauma during their service were homeless within 30 days after leaving the military. That rate went up to 4.4 percent within one year and was 9.6 percent within five years. That is double the rate for Veterans who had not experienced military sexual trauma. The study also found that men who went through military sexual trauma experienced higher rates of homelessness than women who had similar experiences.

The researchers said the study results underscored the importance of screening for sexual trauma in Veterans. Roughly 25 percent of female Veterans and 1 percent of male Veterans have experienced military sexual trauma. Not only is it a risk factor for homelessness, it is often related to serious mental health problems and can contribute to physical illness and substance abuse.