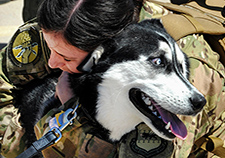 Researchers at the VA Boston Health Care System have adapted a civilian rehabilitation program to create a 12-week workshop to help Veterans who have returned home to the U.S. after serving in Iraq or Afghanistan. The aim of the "STEP-Home" workshop is to strengthen behavioral and emotional skills so that Veterans are better equipped to rejoin their families and civilian communities.

STEP-Home is a short-term treatment program (12 two-hour weekly group meetings, plus three to six individual sessions) based on a mild traumatic brain injury rehab program for civilians called STEP. STEP-Home meetings take key ingredients from the civilian program and modify them to better address problem areas for Veterans. The treatment topics adapted from the STEP program include problem-solving, emotional regulation, and attention training. Researchers added topics that Veterans are more likely to have problems with, such as vocational counseling, substance misuse, and anger management.

Because many Veterans struggle with moderating their emotions once they are back in the community, a typical problem addressed in a STEP-Home session is how Veterans can deal with anger directed at civilians, such as road rage. Memories of driving in military convoys can trigger feelings of threat in Veterans who are cut off or tailgated in traffic. STEP-Home trainers teach Vets a set of tactics they can use to regain control of their emotions using cognitive behavioral concepts. Vets are taught to identify the event (being cut off), their feelings (anger), their thoughts (I am under attack), and finally their behaviors (screaming at the driver). To stop the cycle of rage, Veterans are encouraged to think of alternate actions they could take to help them calm down and de-escalate the situation. For instance, pulling over and stopping the car so they can call another Vet to vent and get support.

In a recent feasibility study, 69 Veterans who had served in Operation Enduring Freedom (OEF), Operation Iraqi Freedom (OIF), or Operation New Dawn (OND) were enrolled in STEP-Home. Most were referred from VA health clinics or research centers. A majority had some type of mental health condition—86 percent were diagnosed with PTSD; 35 percent had at least one traumatic brain injury; and many had also been diagnosed with a mood, anxiety, or substance use disorder.

Of the 69 participants, 58 Veterans completed the STEP-Home workshop. Of those, 34 showed improvements in functional status as measured on a disability assessment tool. Significant gains in attention, problem-solving, and emotional regulation skills indicated positive change during treatment.

The Veterans were also asked to share their opinions about the program by filling out questionnaires after completing the workshop:

The researchers concluded that STEP-Home is an acceptable treatment program for returning Veterans who suffer emotional difficulties as they try to reintegrate into their home communities. Veterans found the program tolerable and showed excellent compliance with program activities. Drop-out rates were less than half for those undergoing standard treatment for PTSD in OEF/OIF/OND Veterans.

Lead researcher Dr. Catherine B. Fortier is associate clinical director for the VA Rehabilitation Research & Development, National Center for TBI Research, and an assistant professor of psychology at Harvard Medical School. She has spent her research career at VA studying the effects of conditions like PTSD and TBI on returning Veterans, and the problems they experience as a consequence.

"Most important," says Fortier, "Veterans who completed STEP-Home reported greater openness to other VA services, and outcome data supported this with greater treatment and community engagement after completing STEP-Home. We believe that STEP-Home may function as a gateway for Veterans who are hesitant to participate in traditional but critically needed mental health treatments at the VA."

Fortier recently presented the findings from her pilot study at the American College of Rehabilitation Medicine (ACRM) and the IBIA Eleventh World Congress on Brain Injury, and is preparing the findings for publication.