This Issue: The Returning Veteran | Table of Contents: Winter 2018 | Download this issue 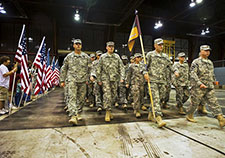 Family and friends hold American flags for soldiers as they march through the doors of a hangar at Stout Field in Indianapolis after returning home from deployment to Afghanistan. (Photo by Virin, U.S. Department of Defense)

Family and friends hold American flags for soldiers as they march through the doors of a hangar at Stout Field in Indianapolis after returning home from deployment to Afghanistan. (Photo by Virin, U.S. Department of Defense)

National Guard members can experience unique challenges when returning to the United States and their civilian lives, say researchers with the VA Ann Arbor Health Care System. Adding to the body of work already done by VA, Dr. Rebecca K. Sripada and colleagues interviewed 78 Operation Enduring Freedom/Operation Iraqi Freedom NG service members about their experiences with reintegration. Nearly three-quarters of study participants said they experienced problems after returning home, while 27 percent of participants said they did not. Many said they had problems with anger and alcohol use, difficulties communicating with family members, and reluctance to ask for help with mental health issues.

Sripada and her colleagues noted that the study participants reported problems that ranged from mild and transitory to major life hardships that disrupted their quality of life. The most frequently cited burdens were related to the unique circumstances of NG service. Guardsmen live in both civilian and military communities, and as a result can suffer both job insecurity and social isolation. Because they do not return to life on a military base, they miss out on base amenities and services. They also do not have continued access to unit members who could offer moral support.

They say strengthening both military and civilian social networks could help guardsmen better process emotional issues, and potentially make it easier to ask for help when needed. In addition, access to mental health educational services, like Coaching into Care, is very important for families. Guardsmen can be reluctant to admit they are feeling emotionally vulnerable, especially men who feel stigmatized by admitting to "emotional weakness." Very often, it is family members or spouses who recognize that the service member is having troubles.

Finally, employment services for NG members are vital. Previous studies have found 15 to 40 percent of returning Veterans report unemployment or financial problems. Sripada and her colleagues note concerns among study participants with employment issues like underemployment or not getting along well with employers. Very often employment problems coexist with mental health issues. They suggest VA psychiatrists partner with career counselors to encourage participation in mental health services.