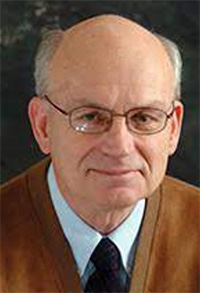 Dr. Dudley Childress won VA’s prestigious Paul B. Magnuson Award, among other honors, for his pioneering work in rehabilitation, orthotics, and prosthetics research.

Dr. Dudley Childress, a pioneer in prosthetic, orthotic, and assistive device technology, was one of the world’s leading biomedical engineers.

He was a senior VA researcher at the VA Chicago Health Care System, now known as the Jesse Brown Department of Veterans Affairs Medical Center, and he served in the U.S. Army.

Childress helped pioneer the myoelectric control system—a technology that applies electrical signals from muscles to activate prosthetic limbs. In the 1970s, he and his team became the first to design and commercially introduce the “sip and puff” wheelchair. Users can send electrical signals to a device by sipping or puffing into a straw, tube, or wand. The assistive technology is mainly used by people who are paralyzed and are unable to use their hands.

In 2002, Childress received VA’s prestigious Paul B. Magnuson Award, the highest honor given to VA rehabilitation investigators, for his work on behalf of people with disabilities. The award is given to a researcher who “exemplifies the entrepreneurship, humanitarianism, and dedication to Veterans displayed by Dr. Magnuson.” Magnuson, VA’s chief medical director after World War II, was a pioneering orthopedic surgeon who built the VA health care system.

Born in 1934 on his grandparents’ farm in a small town in Missouri, Childress had humble roots. He took an interest in machinery on the farm and became valedictorian of his class in high school, where he was also an all-state football player. He studied electrical engineering and was a star quarterback at the University of Missouri, earning a bachelor’s and a master’s degree in electrical engineering in 1957 and 1958, respectively.

Childress built his career at Northwestern University, becoming a tenured professor in the departments of biomedical engineering and physical medicine and rehabilitation. From 1972 until his retirement in 2005, he directed Northwestern's Prosthetics Research Laboratory and Rehabilitation Engineering Research Program.

‘A lasting and significant impact’

Childress was a widely recognized researcher in the areas of biomechanics, human walking, artificial limbs, orthoses, ambulation aids, and rehabilitation engineering. His group also developed one of the first systems to help people with paralyzed hands and arms activate electrical devices, such as lights and appliances.

In 1998, with VA assistance, Childress and his colleagues developed a state-of-the-art motion analysis system dedicated to studies of prostheses, orthoses, and other ambulatory and manipulation aids. Childress also developed theories that have been applied to improve the walking ability of people with limb loss. Case in point: He and his team developed the “shape and roll” prosthetic foot, a simple, yet highly functional prosthesis for use in low-income countries.

In addition to the Magnuson Award, Childress earned other honors for his pioneering work in rehabilitation, orthotics, and prosthetics research:

Childress was also a founding fellow of the American Institute for Medical and Biological Engineering . After a long illness, he died in 2014 at the age of 79.

“Dudley was a true pioneer in biomechanics and rehabilitation engineering,” said Dr. Eric Neilson, vice president for medical affairs at Northwestern. “His contributions to the fields of medicine and engineering have made a lasting and significant impact on rehabilitation patients here and around the world.”