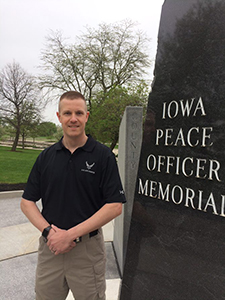 Serving in the military was something I had been interested in since I was a kid. It was something I saw as a chance to serve a higher purpose, push myself outside of my comfort zone, and do things that I never thought possible.

My interest in research began in elementary school. I completed projects and reports on the human body and on giant gas planets in the solar system. My interest in research continued to grow in my undergraduate years at the University of Iowa. One of my professors offered me a special assignment to write an article on leadership styles and team productivity. While studying for my master’s degree in social work at the University of Iowa, I found the research courses to be by far some of my favorites. During the coursework, I developed a much deeper appreciation of the importance of research beyond merely satisfying intellectual curiosity. I learned how research can have a monumental impact on the world and the lives of others on so many levels.

One of my commanding officers on active duty, Brig. Gen. Walter Lindsley, whom I served under as a young lieutenant, was an amazing mentor who had a profound impact on my life. He taught me a lot about true leadership, what it means to be a military officer, taking care of the mission and those for whom you are responsible, and being a person of utmost integrity. Many first sergeants and other senior enlisted service members taught me about making informed command decisions by listening to those with experience, not being afraid of failure when it happens, and overcoming challenges together as a team. 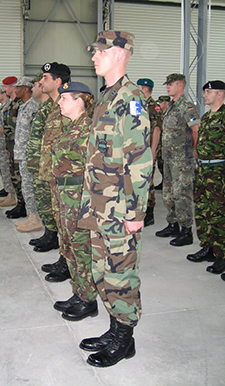 Otto here on deployment with the NATO-led Stabilization Force in Bosnia and Herzegovina in 2006.

Otto here on deployment with the NATO-led Stabilization Force in Bosnia and Herzegovina in 2006.

I served active duty in the Air Force from 2002 to 2008 as a personnel force support officer. I was stationed in California, Arizona, and the Azores, an archipelago in the mid-Atlantic. I deployed with the NATO-led Stabilization Force in Bosnia and Herzegovina in 2006. While I learned a lot at every respective duty station, having the opportunity to live overseas and work with people from so many different countries and cultures was one of the most profound and important experiences of my life. It gave me a deep appreciation for what it means to be a citizen of the United States, but also being much more open and accepting of other ideas and points of view different from my own. Serving in the military helped me to see things in a very different light, to let go of a lot of my prejudices, and regarding research, to become more aware of and challenge my biases.

Currently, I consider myself more of an “end user” of research. I use it a lot to fine-tune how I approach my job and to identify trends and areas of greatest need, particularly in Veteran suicide prevention. I conducted a study as part of my master’s degree coursework on social and occupational functioning of Veterans with mental health diagnoses, with a special emphasis on gender differences. I also assisted my local VA research team in editing articles pertaining to a study investigating the therapeutic benefits between service and therapy dogs for Veterans with PTSD. I’m also the lead author on an upcoming journal article about ethics and access to health care in modern social work practice, and social determinants of health among Veterans. In my profession, I see research as something that can improve health care and treatments, shape public opinion, and implement or change policy. Research has the potential to greatly improve the lives of Veterans on a grand scale.

Living overseas and especially serving with NATO forces significantly impacted my world view and my philosophy on life. Getting a chance to meet and work with people from different parts of the world, including some who dislike me because of where I come from, was an eye opener. I learned a lot about what other people do better, as well as problems they face, and my own strengths and weaknesses. In drawing a parallel to research, it was much like becoming more aware of the limitations of a study, minimizing bias, and openly considering evidence even when it is contrary to my own viewpoints or what I expected.

Having dedicated my professional career to helping fellow Veterans, I consider the chance to make life better for Veterans as the opportunity of a lifetime. It’s why I come to work every day. It’s my mission, my purpose. Research is a cornerstone of these efforts, and without it most of the methods, programs, and therapies I use in carrying out my duties would not exist. Research is also a chance to contribute to making these tools of the trade more effective and even discovering new ones.

Absolutely! Being a clinical social worker and mental health clinician, especially in my current role as a suicide prevention coordinator, is a tough field. It is indeed rewarding. Having the opportunity to be there for fellow Veterans and my teammates is what keeps me coming back and giving it my all every day. However, it can be extremely stressful and demanding, and it comes with its fair share of pain. If it were not for my experiences in the military and the challenges I faced afterward, I would not be walking the path I’m on now. These experiences, good and bad, are part of me. They have helped shape who I am, and it’s difficult to envision doing anything else.

After struggling to find myself and where I fit in after returning from active duty, I determined that something that helped me be successful was taking a cold, hard look at myself and identifying what is truly important to me. After taking the uniform off, I suddenly found myself without a strong sense of community, purpose, and identity, and I had to redefine my sense of self. I felt like an outsider in my own country, and at the same time I viewed assimilating back into civilian society as weakness, getting soft, failure. However, remembering the intangibles that cannot be taken away—the survivability, strengths, and resilience I gained while serving in the military—and with the grounding of family and close friends, I was able to find myself again. Finding out what is truly important to you at your core and what you are good at are keys to success. However, this is not easy. Failure is part of that process. But once you find something that clicks, it’s an amazing feeling, and opportunities appear when you least expect them.

At this point, I hope to continue increasing my level of responsibility, eventually getting into policy administration, national program management, or other aspects of the federal government’s senior executive service. Research and perpetual learning are cornerstones of that journey. Depending on where my path leads and what opportunities come up along the way, I am also considering going for a doctorate in behavioral health.