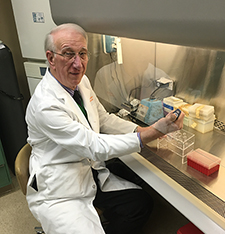 Having served in the military as a physician during the Vietnam War, Dr. Arnold Postlethwaite finds it extremely gratifying to know that his research has or will someday help the Veteran population. He specializes in internal medicine and rheumatology, the study of arthritis and other disorders of the joints, muscles, and ligaments, at the Memphis VA Medical Center. His current research focuses on understanding how diet, sleep deprivation, and vitamin D impact two autoimmune diseases that affect many Veterans, rheumatoid arthritis and an uncommon but equally debilitating condition called systemic sclerosis, or "scleroderma." He's involved in developing treatment options for both diseases.

Postlethwaite: I graduated from medical school in 1966 at the height of the U.S. Vietnam military buildup and the "doctor draft." My country needed me as a physician to care for those in military service for two years, which I did willingly.

I was attracted to science at an early age, and the space race had an effect on my generation to want to explore the unknown in different divisions of science.


Did you have mentors in your youth or at any other time who inspired you in life, the military, or your research career?

I was inspired by several peers in junior high and in high school to excel academically and to have high ethical standards. My family has been in the United States for more than 200 years, and many of my relatives served in the major wars. I personally knew and interacted with relatives who served in World War II and the Korean War. They left examples of military service for me to follow. My dentist sparked my interest in medical science. At several points during my medical education and post-medical school training, there were extremely gifted physician scientists at Cornell University Medical College, Tulane University School of Medicine, and Duke University Medical Center who mentored me at critical junctures in my development as a physician scientist. 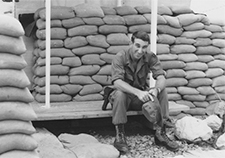 Dr. Arnold Postlethwaite in his military days, in June 1969 at Long Binh Post in what was then South Vietnam.

Dr. Arnold Postlethwaite in his military days, in June 1969 at Long Binh Post in what was then South Vietnam.


When and where did you serve in the military?

After completing a medical internship and one year of medical residency in July 1968, I completed basic training in the Army Medical Corp at Fort Sam Houston in Texas. I was assigned as a battalion surgeon to the 1st Squadron of the 11th Armored Cavalry Regiment at Camp Black Horse in South Vietnam. The regimental commander was Col. George S. Patton IV. I was in charge of the aid station with the 1st Squadron for three months, during which time I received the Combat Medic's Badge for caring for the wounded during an attack by enemy forces.

Due to my extra year of residency training, the 11th Cavalry assigned me to work the next three months in the clearing company located in Camp Black Horse. One of the most memorable experiences I had while serving with the 11th Cavalry was flying back to Camp Black Horse with Col. Patton one afternoon in a Huey helicopter gun ship. Some of the enemy were spotted on the ground as we flew along, so Patton ordered the pilot to turn around and for the door gunners to fire their M60 machine guns at the enemy. He then proceeded to take his dad's ivory handled Colt .45 revolver out of its holster, and he also began firing at the enemy on the ground.

It was customary to rotate general medical officers to larger bases. So after serving six months with a combat unit, I was rotated to Long Binh Post, where I was commanding officer of the 541st Medical Dispensary. The purpose of the 541st was to render medical care to the military service personnel assigned to Long Binh Post. Although Long Binh Post was not subject to ground attack for the most part, it was a frequent target of enemy long-range rockets.

I was rotated back to the U.S. in August 1969 and was chief medical officer at the Armed Forces Examining and Entrance Station in Richmond, Virginia, for the last year of my military service. I examined military draftees and recruits to make sure they were physically fit for military service.


What type of research are you involved in, and how does your work potentially impact Veterans?

I am a board-certified internist and board-certified rheumatologist. I started out trying to explain how immune reactions and inflammation work to cause destruction of tissues and organs in the body. I later applied the knowledge I gained from this basic science approach to human diseases, including rheumatoid arthritis and scleroderma. Throughout my career, I've been supported by research grants from government and private sources. My research focuses on understanding how diet, sleep deprivation, and vitamin D affect these two autoimmune diseases.


Did your military experience inspire you to pursue a career as a VA researcher?

I was exposed to Veteran patients in major university-affiliated VA hospitals in medical school and during my residency training. I liked the organizational structure of the VA hospital, including its commitment to biomedical research to better the life of Veterans. I guess in some way the bond I have with war Veterans from my Vietnam experience worked in some not so obvious manner to steer me to VA to conduct research to better understand tissue destruction and repair processes.

Serving in a war zone allows one to be able to empathize with other Veterans at many different levels. This may be one of the drivers that has allowed me to continue my research at VA and on diseases that Veterans have. As a physician caring for Veterans with rheumatic diseases, being a Vet myself creates a connection to Veterans that is different from the connections I have to patients who are not Veterans.

No doubt, my parents were extremely important in instilling in me high moral values and the desire to pursue an education and be successful in life. My wife has also been supportive of my career as a researcher. Don't give up if you fail. One has many failures as a researcher. You learn from the mistakes and never lose sight of the ultimate or intermediate goals of your research. You keep trying until you are successful.


What's the next step in your VA career?

I just received funding for a four-year VA clinical Merit Award to study the effects of vitamin D on rheumatoid arthritis. So I will be busy on that project for the near future. As long as my health is good and my brain still works, I want to continue doing research in VA.