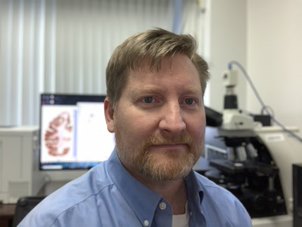 Dr. Bertrand Huber is the director of the PTSD Brain Bank at the VA Boston Healthcare System.

Dr. Bertrand Huber, an Army Veteran, is the director of the PTSD Brain Bank at the VA Boston Healthcare System. His research focuses on the relationship between traumatic brain injury and neurodegenerative diseases, with a primary interest in how the brain clears damaged proteins after injury. Much of his current work centers on repetitive brain trauma and preventing the accumulation of tau, a critical protein that can choke off or disable neural pathways that control memory, judgement, and other areas of the thought process. He is also an assistant professor of neurology at Boston University. He served in the U.S. Army from 1989 to 1992 and received the Army Service Ribbon, the National Defense Service Medal, and the Overseas Service Ribbon, among other honors.

Two main factors influenced my decision to join the military. The first was that I grew up during the Cold War, and it truly felt like nuclear war could happen at any time. I felt that joining the military was something I had to do to defend the country. Even though a person is inconsequential during a nuclear exchange, I felt that serving the country is an important act. I also joined the military because the United States opened its doors to my family after World War II. My great grandfather was killed in the Nazi concentration camps. While it’s not clear if it was because of his heritage or his refusal to work for the German war machine, he was eliminated. After the war, my grandmother immigrated to America. From an early age, I knew that I would join the military to do my part to prevent what happened in Germany from ever happening again. I felt that I would never be able to pay back what I had gained by being an American, but that I might at least be able to pay it forward to the next generation.

When I was in the Army stationed at Fort Stewart in Georgia, I met a soldier after the first Gulf War who had a strange new sickness. We now know this disease as Gulf War illness. I met him while we were both processing out of the Army. We became friends. This chance encounter started me thinking about what kind of career I wanted. At the time, it was just a seed of an idea. But as I studied at the University of California, Santa Cruz, medicine became the focus of my academic work, eventually leading me to a doctorate in biophysics at the University of California, San Francisco, and later a medical degree from the Health Sciences & Technology program at Harvard University.

Many mentors have inspired me during my career, but it is exceedingly difficult to pick one above another. When I was in the military in basic training, my drill sergeant was very inspiring. He was a champion kickboxer who had served in the military for many years and had an attitude toward life that anything is possible if you set your mind to it. His way of thinking made me realize that most limitations are self-imposed, which paved my way for graduate school and medical school. I now work with Dr. Ann McKee, one of the top experts in the country on the neurodegenerative disease chronic traumatic encephalopathy, at the PTSD Brain Bank. She has mentored me while I have been in Boston. Her stories and insights about science are a constant source of inspiration to me. Her work is an example of how you can make a difference through scientific research. I have also worked with Dr. Matthew Friedman, who was the leader of the National Center for PTSD for years and was responsible for the creation of the PTSD Brain Bank.  His ability to lead and find consensus is inspiring. 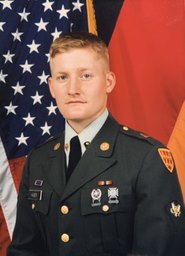 Bertrand Huber served in the Army from 1989 to 1992 and was stationed in Germany at a frontline NATO air base during the Cold War.

I entered the military in 1989. I did my basic training at Fort Bliss in Texas. I signed up for the Army College Fund, which limited me to a small number of combat arms jobs. But I did have the opportunity to pick my duty station. I picked Germany and was stationed at Bitburg Air Base, which was a frontline NATO base during the Cold War. I was part of an anti-aircraft group that was deployed to protect the base from Soviet attack. My time in the military coincided with the removal of the Berlin Wall. It was an amazing time to be in the military, especially in Germany, because it was the end of the Cold War.

However, almost as soon as the Soviet Union fell, the first Gulf War started. I recall the anxiety as we prepared for war. The base was locked down as we prepared for deployment. At that time, I had the rank of specialist and was responsible for targeting and firing our antiaircraft system. Our training took on a different feel as we drilled for combat. For those old enough to remember, the war was over in five days, and my unit was not deployed to the Persian Gulf. I have many fond memories of Europe. I explored France, Spain, Switzerland, and Italy and stopped in Czechoslovakia. Despite the hard work and the Gulf War, I got the opportunity to see the world.

I run the PTSD Brain Bank at the Boston VA. We receive brains from deceased donors with PTSD, those with a history of depression, and others without any known psychological diagnosis, which is a control group. The goal of our research is to identify PTSD in people using new biomarkers and to treat the disorder by understanding the underlying molecular mechanisms. There is a significant need to be able to track the disease as it progresses and to determine if therapies are effective. We also need new therapies that treat the underlying PTSD process. We have learned a great deal about different aspects of PTSD, but some limitations can only be addressed using human tissue.

My research is focused on PTSD. The use of improvised explosives and a rise in blast exposure has been associated with a greater risk of PTSD in modern conflicts. My time in the military and particularly right after I left the military was an era when soldiers were subjected to an increasing number of blast exposures. The relationship between blast exposure and PTSD has fascinated me for some time, including my years in the military.

That is perhaps the greatest benefit of working for VA. I know that what I’m working on matters to Veterans. It gives me a sense of purpose. I also know that what I’m doing will improve the lives of Veterans, which in turn motivates me to work harder.

Being a Veteran really helps me understand what other Veterans are going through. This is particularly true when one reenters society after being in the military. While the military may be sending you off to fight, it also gives you a tremendous amount of structure and security. Your return to civilian life is more difficult than one would think. If you were in combat, most of what you know is hard to translate into a new job or career. If you then add physical injuries or psychological trauma like PTSD, it can be even more difficult to reenter. Sometimes, just having someone to talk to that has been through it can help tremendously. While I did not have the kinds of traumatic experiences that one may get from combat, I do understand the military mindset.

The secret to my success is an unwillingness to listen to the little voice that says I cannot do it. We are our own greatest enemies when it comes to accomplishing things. I feel strongly that this mindset was something that came out of basic military training. The drill sergeants were constantly pushing us to the edge of what we thought was possible and, in the process, showing us how much more we were capable of doing.

My goal is to expand the PTSD Brain Bank and put brain tissue in the hands of researchers so we can better understand the disorder. The goal is to understand the process well enough to be able to detect it with routine imaging procedures and blood draws. Once we understand the biological mechanisms that lead to PTSD, we can then target treatments. I plan to continue my own research, which focuses on the support cell in the brain that is collectively called glia. These cells nurture and protect neurons, which are the unit of cognition in the brain. My research involves advanced microscopes that can look deeply into tissue and create 3D reconstructions of the brain. This work helps us understand how PTSD remodels the brain by changing the genetic programs of individual cells and altering the connections between cells.