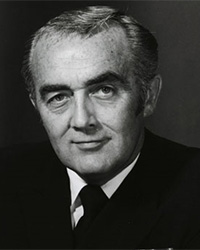 Dr. Donald Custis served as VA's chief medical director from 1980 to 1984. His "great contributions to the nation and its Veterans are almost impossible to list," former VA administrator Harry Walters once said.

Dr. Donald Custis was a staunch advocate of the welfare of Veterans and played a key role in shaping today’s VA health care system.

Custis, who died at the age of 103 on March 18, 2021, joined VA’s Department of Medicine and Surgery in 1976 after retiring from the Navy with the rank of vice admiral. He served as director of the agency’s Office of Academic Affairs and oversaw VA’s relations with every medical school in the country, until being named VA’s deputy chief medical director in 1978.

In 1980, President Carter appointed him chief medical director of what was then the Veterans Administration. In that powerful role for four years, he strengthened VA care for aging Veterans, establishing training programs and research, education, and long-term care services that have long made VA a leader in geriatric medicine. He also boosted the agency’s role as a primary training ground for physicians through its affiliations with medical schools, and he expanded VA’s award-winning research programs.

Custis also drove VA to adapt to the needs of Veterans of the Vietnam War. Today’s highly successful Vet Center program was created and implemented during his tenure, when Congress designated VA as the nation’s backup medical system in times of national emergency. VA has since carried out this mission during floods, earthquakes, fires, and most recently during the COVID-19 pandemic.

Upon Custis’ retirement from VA in 1984, VA Administrator Harry Walters said his “great contributions to the nation and its Veterans are almost impossible to list. His dedication to our country, and his management of the VA medical care delivery and research systems provide an example for all of us in public service. I salute him for the leadership he has provided in helping make the VA one of the best health care systems in the world.”

Custis was born in Goshen, Indiana, on July 23, 1917. In 1939, he earned a bachelor’s degree from Wabash College in Indiana, before being commissioned ensign in the U. S. Naval Reserve. While on inactive duty, he completed his medical degree at Northwestern University in Illinois in 1941.

After joining the Navy during World War II, Custis served as a junior medical officer on a Navy attack transport ship, the USS Clinton. The warship transported troops in one of the final campaigns of U.S. operations in the Pacific theater—taking the island of Okinawa.

During a 10-year break from the Navy, Custis spent time as a surgeon in private practice, among other medical endeavors. In 1956, he accepted an appointment as a commander in the Navy Medical Corps and was promoted to captain. He also joined the staff of the American Medical Association’s Council on Medical Education and certified residency programs.

Custis served a year during the Vietnam War as commanding officer of the Naval hospital in the South Vietnamese city of Da Nang. He later commanded the Bethesda Naval Hospital for three years, before President Nixon appointed him in 1973 to a four-year term as surgeon general of the Navy. He was also promoted to the rank of vice admiral.

Custis continued advocating for Veterans when he retired from VA in 1984. He accepted a position as medical director of the organization Paralyzed Veterans of America (PVA). He directed PVA’s grants to medical institutions and established an independent budget review of VA’s budget that assessed the degree to which the budget was meeting the growing needs of American’s Veterans. Today, Congress and federal policy makers rely on that independent budget when forming VA’s annual appropriation.

‘I would want to be the same thing’

Over the years, Custis wrote articles on military and Veteran health issues that appeared in major medical journals. He also gave the annual Donald Munro Memorial lecture on Sept. 10, 1992, at a conference of the American Paraplegia Society. The lecture was titled, “The VA Responsibility in Tomorrow's National Health Care System.” Dr. Donald Munro, an American physician, was a pioneer in spinal cord medicine.

Custis received many awards and distinctions for his military and civilian work, including the Distinguished Service Medal, the Legion of Merit with Combat V for military service in Vietnam, and the American Medical Association’s prestigious Nathan Davis award for outstanding government service.

Custis enjoyed every minute of his life and career in military medicine and government affairs. In his oral history, he remarked, “I can’t remember the time when I didn’t want to be a physician, and if I’m ever reincarnated, I would want to be the same thing.”