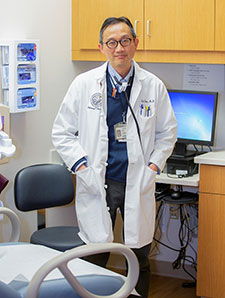 Dr. Edward Chan, an Air Force Veteran, is a staff physician in the pulmonary division at the Rocky Mountain Regional VA Medical Center in Aurora, Colorado. (Photo by Shawn Fury)

Dr. Edward Chan, an Air Force Veteran, is a staff physician in the pulmonary division at the Rocky Mountain Regional VA Medical Center in Aurora, Colorado. (Photo by Shawn Fury)

Dr. Edward Chan, an Air Force Veteran, is a staff physician in the pulmonary division at the Rocky Mountain Regional VA Medical Center in Aurora, Colorado. He and his colleagues study immune responses to lung diseases, such as tuberculosis. He also practices at National Jewish Health, a respiratory hospital in Denver that researches and treats lung, heart, and immune diseases, and is a professor in pulmonary sciences and critical care at the University of Colorado School of Medicine. He served from 1989 to 1993 in the U.S. Air Force Medical Corps and received the U.S. Air Force Achievement Medal and the National Defense Service Medal, among other honors.

I realized that the Health Professions Scholarship Program could pay for my medical school tuition. I also knew that I would have the privilege of serving in the U.S. military.

I’ve been interested in tuberculosis since I was in medical school at Columbia University in New York City, where we saw many patients with tuberculosis. I also spent two months seeing and treating patients at the Phebe Lutheran Hospital in Liberia. There, I witnessed all forms of tuberculosis, as well as leprosy. At National Jewish Health, we have evaluated and treated patients with highly drug-resistant tuberculosis, as well as non-tuberculous mycobacterial lung disease, which occurs when people inhale organisms from the environment. Both are equally challenging to treat.

My internal medicine family physician and surgical colleagues in the military were all fantastic.  I think back to how bright they all were. During my pulmonary fellowship at the University of Colorado, the attending physicians and scientists were all very supportive and had incredible knowledge. Some mentors that come to mind are Dr. Marvin Schwarz at the University of Colorado School of Medicine; Drs. Tom Neff, Polly Parsons, and Michael Hanley at the Denver Health Medical Center; Drs. Michael Iseman, Marion Goble, Jim Cook, Gwen Huitt, Richard Martin, Enrique Fernandez, Peter Henson, and David Riches at National Jewish Health; and Drs. Bill Pluss, Richard O’Brien, and Jim Ellis at Rose Medical Center in Denver; and Drs. Clifford Zwillich, Dennis Doherty, York Miller, Carolyn Welsh, and Edward Dempsey at the Rocky Mountain Regional VA Medical Center. I continue to learn from the fantastic medical residents and pulmonary fellows at the University of Colorado.

After a civilian residency in New York city, I was active duty as a general internist from 1989 to 1993 in the U.S. Air Force Medical Corps. The first two years I was at the F.E. Warren Air Force Base in Cheyenne, Wyoming, and the next two years I was at the U.S. Air Force Academic Clinic in Colorado Springs, Colorado. The clinic consisted mainly of retirees and their dependents with chronic medical issues. I also attended on the hospital ward and the small intensive care unit at the U.S. Air Force Academy hospital. It was a pleasure working with my colleagues and co-workers at both institutions. I learned so much from them about medicine and how to interact with patients. I was also impressed with the level of enthusiasm and skill they displayed in their work.

At the Rocky Mountain VA, we study host immune responses to mycobacterium tuberculosis and to non-tuberculous mycobacteria. Both types of organisms are known to cause chronic lung disease. We do clinical, translational, and basic science research in this context. Emphysema and smoking are known risk factors for these infections, and both are quite prevalent in the Veteran population.

When I was in the U.S. Air Force Medical Corps, I encountered an elderly woman who had cavitary lung disease and positive acid-fast bacteria on her sputum, a thick liquid that comes up from the lungs when a person is sick. I was surprised when she was found NOT to have tuberculosis but rather a lung infection due to non-tuberculous mycobacterial lung disease (NTM). The infection was due to environmental organisms that I had been taught were a “colonizer” and to ignore. I knew so little about this condition that in 1992, I presented her case at National Jewish Health, which has a long-standing reputation for treating tuberculosis and NTM lung disease. Mycobacteriologists there educated me that she does, in fact, have NTM lung disease. This patient was instrumental in my desire to become a pulmonologist and to study and research NTM and tuberculosis.

Emphysema is a well-known risk factor for NTM lung disease, and we know that emphysema is very common in the Veteran population. NTM lung disease is often not considered as a diagnosis when the COPD of a patient is worsening, so I’m always vigilant about such cases. COPD is a chronic inflammatory lung disease that causes obstructed airflow in the lungs. The NTM lung disease is especially problematic in COPD patients. They already have a compromised lung function and then get this difficult-to-treat superinfection. If I can contribute even in a small way to better understand why or how one gets this disease, I will feel that I’ve done my job with satisfaction.

I feel great when I’m able to help Veterans even with small things because I know–based on my experience with my incapacitated parents–that it’s so tough trying to get in contact with providers. I know first-hand how illnesses can weigh on patients physically and emotionally, so I always try to provide them with hope, but hopefully not false hope. I know many Veterans have experienced terrible hardships during and after their active-duty days. I especially learned this after performing interviews and examinations for VA’s department of compensation and pension, which helps determine whether a patient’s medical condition is service-connected. Also, in clinics and hospital wards, I feel a special bond to my Veteran patients when we trade “war stories” from our active-duty days. I hope they feel the same way about me.

It will always be a work-in-progress for me. But I think that being mindful, having perseverance, and above all, being kind to all, which is not always easy to do, are important keys to success.  Regarding motivational tips, I’d say just do what you like to do, and the motivation will come naturally.

I’ll continue to see Veterans in my chest clinic and to gain greater insight into mycobacterial pathogenesis and the host-immune responses to it.