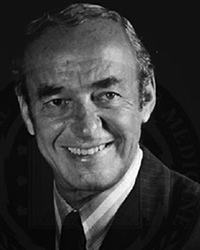 Dr. Edward Freis, who served in the U.S. Army Medical Corps during World War II, led a landmark study that showed even moderately high blood pressure, if left untreated, can lead to disability and death.

In 1964, Dr. Edward Freis of the Washington DC VA launched the first well-designed, placebo-controlled trial to show whether medication can prevent death in those with moderate high blood pressure. In the five-year trial on antihypertensive drugs, Freis and his colleagues aimed to determine whether treating hypertension would help prevent death and incapacity due to heart attack, congestive heart failure, stroke, or kidney damage.

The study was the first of its kind to show that treating high blood pressure reduced the incidence of major hypertensive complications. The treatment group showed a 50% reduction in stroke, congestive heart failure, and progressive kidney damage. The study failed to demonstrate a treatment benefit for preventing heart attack and sudden cardiac death. But it showed that even moderately high blood pressure, if left untreated, can lead to disability and death.

For his work, which led to a revolution in the care of people with hypertension, Freis became known as the leader of the first multicenter, double-blinded, randomized-controlled trial of cardiovascular drugs. In 1971, he received the prestigious Albert Lasker Clinical Medical Research Award for demonstrating the “life-saving effectiveness of drugs in the treatment of moderate hypertension.”

Freis, born in Chicago in 1912, originally considered a career as an actor, before turning his focus to medical research. He graduated from the University of Arizona in 1936 and received his medical degree at Columbia University in 1940.

Freis studied in Boston University’s internal medicine training program, then did a research fellowship at Evans Memorial Hospital in Boston with Dr. Robert Wilkins, who made many advancements in the research of hypertension and heart disease. He then joined the U.S. Army Air Corps (later the U.S. Air Force) during World War II. He served as the assistant chief, then chief, of a pathology laboratory at a base in Nebraska from 1942 to 1944. He was later the chief of the Laboratory Service Rheumatic Fever Research Program on the base.

In the Army Air Corps, Freis worked with Dr. Arthur Mirsky, who was famous at the time for his diabetes research. Mirsky taught Freis how to carry out a medical investigation. In 1944, they published a paper together on shock induced by trypsin, a digestive enzyme that breaks down proteins in the small intestine.

After the war, Freis returned to Boston and completed another residency and a research fellowship at Evans Memorial Hospital. In 1949, he relocated to Washington to be the assistant chief of medical service at the DC VA and a faculty member at Georgetown University. At the VA, Freis conducted studies mainly on cardiac patients. He learned that cardiac output, the amount of blood the heart pumps through the circulatory system in a minute, and stroke volume, the amount of blood pumped from the left ventricle of the heart per beat, decreased in proportion to the severity of a heart attack.

In 1956, Freis, then the chief of medical service at the DC VA, assembled a group of colleagues from other VA facilities to start a cooperative study on antihypertensive drugs. Previously, high blood pressure was considered a normal part of aging, and it was not yet known that treating high blood pressure could prevent death. The goal of the study was to learn how well newer drugs control high blood pressure and whether they can prevent artery hardening, heart attacks, strokes, and other complications. By the 1950s and 1960s, effective drugs for reducing blood pressure were becoming available.

Results of the first series of studies by this group of researchers appeared in the Annals of Internal Medicine between 1960 and 1962.

In 1964, Freis and many of the same investigators launched another study designed to resolve the final mystery about hypertension treatment. They chose what they considered to be the best regimen of drugs, a combination of hydrochlorothiazide, reserpine, and hydralazine.

Earned multiple awards for his work

The study, which ran from January 1964 to December 1969, was one of the first placebo-controlled, double-blind, multi-center clinical trials in the United States. A total of 523 patients at 17 VA medical centers participated.

A report on the research appeared in the Journal of the American Medical Association in August 1970, but there appeared to be limited immediate interest among physicians. However, the 1971 edition of the Cecil-Loeb Textbook of Medicine recognized the results: “Now that controlled trials of treatment in less severe grades of hypertension have been carried out, it is clear that improvement in outlook is conferred by successful treatment.”

Freis retired in 1987 and was named distinguished physician by the DC VA and professor emeritus by the Georgetown University School of Medicine. He continued to advise ongoing clinical studies and publish about hypertension for nearly two decades. He published over 400 articles and book chapters during his long career. He earned multiple awards from medical organizations for his work, and in 1985, the National Conference of High Blood Pressure Councils established the Edward D. Freis Award in his honor.

When he died in 2005 at age 92, Freis was completing a second hypertension book for a popular audience.