After World War II, U.S. military hospitals were flooded with Veterans paralyzed by spinal cord injury. Their complications called for expertise in pulmonary medicine, orthopedics, neurology, urology, dermatology, surgery, and other specialties not yet developed. But the U.S. health care system was unprepared for addressing these wide-ranging and complex medical problems. 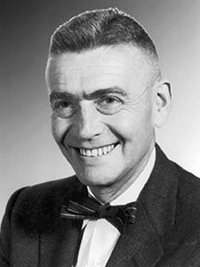 Around the same time, developments in the rehabilitation of spinal cord injury (SCI) began to gain momentum in a revitalized VA system. VA became a leader in comprehensive neurological rehabilitation and has long carried that distinction.

Bors initiated and facilitated the development of departments focusing on spinal cord injury in VA medical centers. Plus, his coordinated, multi-disciplinary approach to the study, treatment, and rehabilitation of SCI was considered monumental and revolutionary. His work extended the life expectancy and quality of life of wounded Veterans and civilians.

Bors was born in 1900 and trained as a urologist in Prague, Czechoslovakia. The Jewish refugee fled to the United States when the Germans invaded his homeland during World War II and enlisted in the U.S. Army Medical Corps. He established the Army’s first spinal cord injury ward hospital during World War II.

A 2016 article in the journal War Neurology by Dr. Douglas Lanska, a neurologist at the VA Great Lakes Health Care System in Illinois, elaborates on Bors’ achievements: In 1944, Bors was stationed at Hammond General Army Hospital in Modesto, California. There, he became a pioneer in neuro-urology, which deals with diseases and functional disorders of the lower urinary tract and sexual organs after damage or lesion to body parts, such as the spleen. He developed a special ward for comprehensive, multidisciplinary SCI care for about 70 patients, many of whom were languishing in a neurosurgery ward.

Lanska’s article also describes Bors’ work after the war: Bors’ spinal cord injury patients and those from three other military hospitals were transferred in 1945 to a new Army SCI center directed by Bors at Birmingham General Army Hospital near Los Angeles. VA assumed responsibility for those patients in 1946, and the entire medical complex was transferred in 1950 to what was, until then, the Navy hospital in Long Beach, California. New SCI facilities were built in 1958 in the first special-purpose spinal cord injury center in the United States. That facility is now part of the Long Beach VA Medical Center.

In the coming years, Bors oversaw the care of some 2,500 people with spinal cord injury and published more than 140 papers, as well as the 1971 landmark textbook Neurological Urology, Physiology of Micturition, Its Neurological Disorders and Sequelae. He co-authored the book with his colleague, Dr. Avrom Estin Comarr. Similar VA and civilian SCI centers modeled on Bors’ approach have been created around the country.

Bors died in 1990. Since 1994, the Journal of Spinal Cord Medicine has given an annual award in his honor called The Bors Award for Scientific Development. The award recognizes the achievements of young researchers whose careers focus on spinal cord injury.