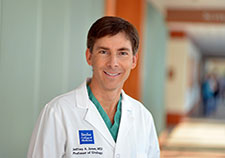 Dr. Jeffrey Jones is chief of urology at the Michael E. DeBakey VA Medical Center and a professor at Baylor College of Medicine.

Dr. Jeffrey Jones is chief of urology at the Michael E. DeBakey VA Medical Center and a professor at Baylor College of Medicine.

Dr. Jeffrey Jones, a Navy Veteran, is chief of urology at the Michael E. DeBakey VA Medical Center in Houston. He’s also a professor at Baylor College of Medicine, with a joint appointment in the department of urology and the Center for Space Medicine. His clinical interests are urologic oncology, which relates to cancer of the prostate, bladder, kidney, and testicles; calculus disease, which is a stone in the kidney or urinary tract; and urological applications for space and flight medicine. He was a lead flight surgeon for the International Space Station for the first 10 U.S. expeditions, until taking over as the lead for exploration and medical operations in NASA’s Constellation program. He has been a lead or co-researcher on many clinical cancer trials and is a fellow at the American College of Surgeons, the American College of Preventive Medicine, and the Aerospace Medical Association.

I wanted to serve my country the same way my father and all of my uncles had done.

I’ve been involved in research since college when I worked in the Thorman Cancer Research Laboratory at Trinity University in San Antonio. I have always wanted to “push the envelope” with patient care to improve the lives of our patients, especially those afflicted with the devastation of cancer.

Yes. Dr. John Donohue, God rest his soul, was my surgical mentor at Indiana University. He was also a man of faith. He received his initial education at Holy Cross College in Indiana. 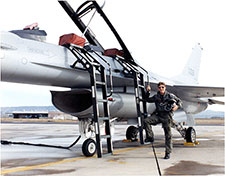 I’ve been a U.S. Navy physician and flight surgeon for my entire 29 years of combined active and reserve military duty. I was last on active duty in 2010 as a Navy flight surgeon, and I’m still serving in the Navy Reserve. I’ve also taken on assignments with the Marine Corps Reserve and the Air Force Reserve via the Texas Air National Guard. I’ve deployed several times with the Marines in support of U.S. military operations in Iraq and Afghanistan. My last deployment was to Ayn al-Asad Airbase in Iraq with Marine Air Group 26. I supported squadrons of aircraft stationed there—EA-6B, F/A-18, C-130—and took shifts at the combat surgical hospital. I also served with Naval Reserve Fleet Hosptial 21, before becoming a Navy flight surgeon, and I served with Marine squadrons for 16 years. I’ve supported the Chief of Naval Air Training and served as the wing surgeon for the 4th Marine Aircraft Wing, the reserve airwing of the Marine Corps. Currently, I’m the wing surgeon for the Commander Fleet Logistics Support Wing. Its squadrons provide air logistics support for all Navy commands and training for mobilization readiness.

I was involved with cancer research before I joined the military. But my military service has strengthened my resolve to help Veterans.

That is of paramount importance to me. Our mission at the Michael E. DeBakey VA Medical Center is to make life better for our Veterans in any way we can.

My prior service motivates me to strive for better treatment and allows me to understand what Veterans have been through. Certainly, since I’m a fellow Veteran, I have credibility with Veterans when we discuss their past experiences and current life stressors.

Perseverance is the number one factor, and focusing one's energy on goals of higher purpose enables one to persevere. I tell young folks to "do your best, think of others before yourself, and don't let setbacks deter you from your goals."

That’s still to be determined. But I hope to stay involved with the mission of improving the health and welfare of our nation’s Veterans.