Dr. Kenneth Heilman, who joined VA in 1977, has devoted more than four decades of his life to the agency. The Air Force Veteran served as chief of the neurology service at the Malcom Randall VA Medical Center in Gainesville, Florida, from 1996 to 2009. There, he helped train more than 70 post-doctoral fellows in behavioral neurology and neuropsychology. He’s now in the Geriatric, Research, Education, and Clinical Center at the Gainesville VA and is a distinguished professor emeritus of neurology at the University of Florida. He received distinguished career awards from the International Neuropsychology Society and the Society for Behavioral and Cognitive Neurology, and he’s an honorary member of the American Neurological Association and a fellow of the American Academy of Neurology.

My grandmother lived in Belorussia [present-day Belarus and Poland) when she was pregnant with my mother. But she wanted to raise her children in a country where they could be free and not harassed. Therefore, she immigrated to the United States. She loved America and wanted her grandsons to serve this country. I was also on the Berry Program. Although I had several years of deferment, I could not decide if I should go into neurology or stay in internal medicine. In addition, the war in Vietnam was growing, and the military did not have enough doctors. After doing two years of medical training at Cornell University-Bellevue Hospital, I volunteered for active duty and entered the Air Force in 1965.

From the time I was a boy growing up in Brooklyn, New York, I saw people suffering from medical diseases. I learned that when I was six months old in 1938, I had meningitis. A new form of medication, sulfonamides, saved my life. My family consisted of reformed Jews who strongly believed in “Tikkun olam,” a concept in Judaism to bring on the Messianic Age by “upholding the falling, healing the sick, freeing the captives, and comforting all who suffer.” What more could I do to make my life meaningful than take care of the sick and do research to heal the sick and reduce suffering?

In addition to my family, three mentors had a great influence on my career. My first mentor was Abraham Goodman, my high school geometry teacher. He taught me the joyful reward of solving a problem. When I was in medical school, for example, I saw a patient who had unilateral spatial and personal neglect. This patient was unaware of almost everything that was on the left side of his body. I learned that this is a terribly disabling disorder and told myself I want to understand why he’s unaware and how we can treat it. Since then, I’ve authored more than 140 peer-reviewed articles about this disorder. The chair of Harvard University’s neurological unit, Dr. Norman Geschwind, was another key mentor. He introduced me to the methods by which we can learn how cognitive activities are performed by the brain and what happens to these activities when the brain is injured. He also encouraged me to become an academic neurologist so I could take care of patients, teach, and do research. My third major mentor was Dr. Melvin Greer, chair of the neurology department at the University of Florida. He hired me as a member of the faculty. He taught me that great leaders do not ask, “What can you do for me?” Instead, they ask, “What can I do for you?” 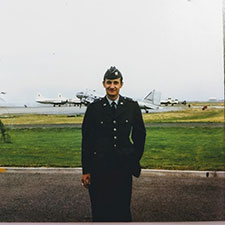 When I entered the military in 1965, the Air Force didn’t have a hospital in Vietnam. So I was named chief of medicine at the NATO hospital in the western Turkish city of Izmir. While there, I held clinics for the sick members of our military and their family members. I also cared for sick military members from other NATO countries, except for Turkey. I was responsible for hospitalized American patients with serious medical diseases, and I consulted with and supervised other physicians at the hospital. After completing my service in 1967, I took a residency and a fellowship in the neurological unit at Boston City Hospital. I joined the faculty at the University of Florida in 1970.

I’m the author-editor of 16 books, more than 100 chapters, and more than 600 journal publications on neurological issues. Together with my co-workers, I’ve described new neurological diseases, such as orthostatic tremor, a rare movement disorder marked by a rapid tremor in the legs that occurs when standing, as well as possible treatments. I’ve also helped to better understand the science behind neurobehavioral deficits, such as spatial neglect, apraxia, poor emotional communication, aphasia, and amnestic disorders. The brain disorders that trigger those forms of neurological deficits are most often caused by stroke, degenerative brain diseases, and head trauma. Those three diseases are major causes of Veteran disability and suffering.

I’ve authored several books on those topics, including Matter of Mind, Creativity and the Brain, and PGY1: Lessons in Caring. Some of the most important motivational factors are finding joy in learning, being curious and showing an eagerness to investigate, working hard and persisting until you are successful, having empathy, and trying to make the world a better place.

One of my most important activities today is teaching and mentoring students, residents, and cognitive-behavioral neurology fellows. My colleagues and I have trained many fellows who are now world leaders in cognitive and behavioral neurology. We are continuing this training. I also plan to continue caring for Veterans with neurological disorders and to continue my research efforts in an attempt to reduce disabilities and suffering.