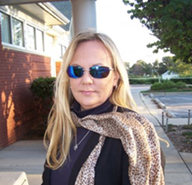 Dr. Lisa Marie Sternke, an Army Veteran, is the electronic consultation program coordinator at the Ralph H. Johnson VA Medical Center in Charleston, South Carolina. She works to improve electronic consultations between providers. A registered nurse, she’s also an affiliate instructor of psychiatric and mental health nursing at the Medical University of South Carolina. As a member of the Health Equity and Rural Outreach Innovation Center at the Charleston VA, she focuses her research on the health of female Veterans. She also mentors other nurses in advanced nursing programs. Before coming to the Charleston VA in 2010, she worked in neonatal intensive care and served as the inpatient care nurse manager for a drug and alcohol treatment facility. She was chosen by the Elizabeth Dole Foundation to serve as a military caregiver fellow for South Carolina from 2016 to 2018.

As the daughter of a Naval Academy graduate and someone who has many uncles, great uncles, and ancestors who served in all conflicts from the American revolution through Vietnam, I always considered the military an option. I even considered applying to the U.S. Coast Guard Academy after high school. But in the end, I chose Bucknell University for a mechanical engineering degree with a biomedical option, with the intention of going to medical school. To be honest, my first year of college was a total disaster. I had to make a drastic change and enlisted in the Army Reserves. That was one of the best decisions in my life.

When I began my doctoral program at the Medical University of South Carolina, my initial focus was on neonatal care. I intended to become a neonatal nurse practitioner. That changed abruptly when one of my oldest and dearest Army friends was deployed to Iraq when the conflict began in 2003. We managed to keep in touch through email whenever he could manage it. One day I got an email saying, “Be glad you’re not here, Lis. All the female MPs [military police] are right there on the front lines with everyone else.” My immediate question was how are these women reacting to and dealing with combat that they’re trained for yet aren’t supposed to be part of? I completely changed my research focus to combat exposure on women’s mental health, with an emphasis on combat-related PTSD and gender differences related to combat exposure measurement.

One of my greatest mentors is my mother’s best friend, Donna Pinter. As a clinical psychologist and writer, she has been an inspiration to me for 40 years. She always pushes me to do more and learn more. My military mentor was my special agent in charge, Chief Warrant Officer James Flahive, known as “Chief.” Like Donna, he always expected more of me than I thought possible. He was a brutal report editor. To this day, I rarely use the word “that” in writing, and I do my editing with a blue felt pen. I have three very special research mentors, Dr. Charlene Pope, Dr. Janet York, and Dr. Barbara Edlund. Dr. Pope was my dissertation chair. She would accept nothing less than what she thought was my best work. She consistently encourages me to explore new research possibilities and to keep writing. Dr. York was also on my committee. Although she’s now retired, we continue to work on writing and research projects together. Dr. Edlund opened my eyes to the possibilities in nursing and is why I chose this path. Their input, advice, and consistent mentorship makes me a much better scientist. 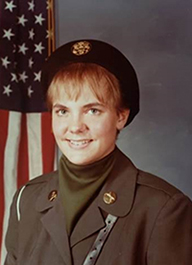 Lisa Sternke in basic training at Fort McClellan in Alabama in 1983.

I joined the Army Reserves in 1983 in Lewisburg, Pennsylvania, and went to basic and advanced individual training at the U.S. Army Military Police Academy at Fort McClellan in Alabama. I stayed there as a reservist, then went into active duty in February 1985. I was lucky to be assigned to Fort McClellan and worked as a road military police officer for a year and a half. To this day, I maintain friendships with six soldiers I was stationed with there and two from basic training. In September 1986, I was moved to my new station at a headquarters detachment in Pirmasens, Germany. There, I was detailed to criminal investigations as a military police investigator on the drug suppression team. That was a very exciting job. I worked undercover, buying drugs and arresting dealers to reduce the supply available to military members. Under those often-dangerous circumstances, our group became very close because we depended on each other for survival if something went wrong. I remain in contact with almost all of them, and I’m now married to one of them.

I am mainly involved in research concerning the health of women Veterans. I recently served as the Veteran consultant on a dissertation committee for research on psychosocial functioning in Veterans with combat-related PTSD. Research on women Veterans has exploded over the past 10 years, especially with women now serving in combat roles. Understanding how combat exposure affects women is imperative to knowing how to effectively treat them when they return from deployment. I’m especially interested in combat exposure measurement since older scales that remain in use were created with mainly male Vietnam Veterans. Those scales may not accurately reflect the experiences of women. We learn something new every day.

The email that I received from one of my oldest and closest Army friends changed the course of my research career. I feel like VA is where I was always supposed to be. It’s like being part of a family again.

As a female Vet, I find it really important to work toward improving the lives and health of other female Veterans. We are a small and select group that tends to stick together.

Absolutely. No matter when, where, or in which service anyone has served, when a Vet runs into another Vet it’s an instant kinship and conversation. We can send acronyms to each other all day long.

Never give up, be willing to adapt, and take opportunities when they come. I went from the Army, to getting a psychology degree, to suddenly being a single parent of a premature infant, to taking prerequisite courses for physician assistant-medical school at night for 10 years, to choosing nursing after great advice, to quitting my job and going to school full-time for a bachelor’s degree in nursing, then a master’s degree in nursing, then a doctorate. Perseverance is the key.

I hope to continue researching combat scales and gender differences in PTSD and work toward a VA merit award to examine gender differences in the area of combat exposure. I want to continue mentoring nursing students who are seeking an advanced degree and working with our psychiatric-mental health nurse practitioner residency program. Because I received American Medical Informatics Association certification in 2015, I’d also like to explore gender differences in electronic consultation and other telehealth use and outcomes.