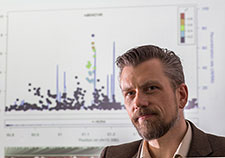 Dr. Mark Logue, an Army Veteran, is a statistician in the National Center for PTSD at the VA Boston Healthcare System. (Photo by Derrick Morin)

Dr. Mark Logue, an Army Veteran, is a statistician in the National Center for PTSD at the VA Boston Healthcare System. (Photo by Derrick Morin)<

Dr. Mark Logue, an Army Veteran, is a statistician in the National Center for PTSD at the VA Boston Healthcare System. His research interests include the genetics of psychiatric disorders and neurological traits, such as PTSD, Alzheimer’s disease, dementia-associated neurodegeneration, and panic disorder. He’s also an associate professor of psychiatry at the Boston University School of Medicine. He has authored and co-authored more than 75 research papers, and his work has been published in dozens of academic journals.

After being admitted to the University of Oregon in the mathematics program, I looked for ways to help pay for college. I considered ROTC but decided that joining the Army Reserves would be a good way to cover the costs of school. Also, doing basic training over the summer months between high school graduation and my freshman year at Oregon sounded more exciting than getting a standard summer job.

While working on my PhD in statistics, I became involved in a genetics project, and I really liked the way it allowed me to use my mathematical and programming skills to address real health problems. I’ve been working on genetic studies ever since.

I don’t know if I can say that I’ve been inspired. But I have had a few mentors and colleagues who have played large roles in getting me to where I am today. My PhD thesis advisor, Dr. Veronica Vieland, was a big influence on my career. She somehow determined that me asking questions from the back of her classes indicated that I was paying attention and interested rather than being difficult. She was the person who made me interested in psychiatric genetics. 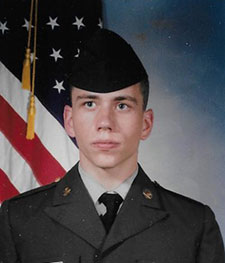 Logue joined the Army Reserves after completing high school in 1989.

Logue joined the Army Reserves after completing high school in 1989.

I joined the Army Reserves after completing high school in 1989. As a medical supply specialist, I was assigned to a reserve combat support hospital unit in Vancouver, Washington. My work was largely that of a clerk dealing with medical supplies: stocking, doing inventory, ordering replacement parts, and performing other similar tasks. My reserve unit was activated in December 1990, in support of Operation Desert Shield, the lead-up to Operation Desert Storm [the Persian Gulf War]. I was sent to a hospital in Stuttgart, Germany, that was gearing up to handle casualties air-lifted from the Middle East. I worked there to increase capacity by ordering more medical supplies, setting up equipment, and retrofitting rooms to have a larger patient capacity. Fortunately, the high casualty load we were preparing for never arrived. I was released back to the reserves in March 1991, where I stayed until I was discharged in 1997.

I work on genetic studies examining the impact of genes on PTSD and Alzheimer’s disease. Because my background is in statistics, my primary focus is on the computation side of things. That means my lab is in an office with a bunch of computers, not a bunch of freezers and test tubes. I write programs and computer scripts to collate and analyze genetic data from hundreds or even thousands of subjects at a time. I then interpret the results. My team is looking at genetics across multiple levels, including genetic variation that is inherited from your parents, epigenetic marks that may control which genes are turned off and on, and the activity of the genes themselves in blood samples and brain tissue. Hopefully, identifying genes and biological pathways related to PTSD and Alzheimer’s disease will lead to new treatments and to better identification of Veterans at risk.

I wouldn’t say that my military experience inspired me to join VA as a researcher. But the GI bill and other benefits of joining the Army reserves were key to helping me afford college and getting the training I needed to do research.  Also, when I finally joined VA, it felt like familiar territory due to my prior government service in the Army Reserves. That is, sometimes in government to get things done, there is quite a bit of paperwork and procedure involved. I think the level of bureaucracy surprises some researchers when they join VA. But at least I had an inkling in advance of what I was getting into.

Seeing Veterans every day when I enter and leave the building is very motivating. It helps me appreciate the fact that my data come from real people who have volunteered their time to participate in these important studies. These are the real people who we are trying to help. I want to keep doing research that can help them lead healthier and happier lives.

As a medical supply specialist in the Army, I viewed myself as someone who worked in a support role at a desk to help combat soldiers. In some ways, I feel like I’m still working to support those soldiers.

An important part of life is learning. Never stop learning. That doesn’t have to mean going to school and getting a doctorate the way I did. It may just mean finding out more about the world through travel, visiting your local library, or trying new things. Often, the payoff for learning isn’t clear at the outset. But it can lead to new opportunities that you don’t even think are possible.

I’m in the process of starting a project to see if genes for Alzheimer’s disease interact with trauma exposure and head injuries to increase the rate of Alzheimer’s and cognitive decline in aging Veterans. This project will use data from VA’s Million Veteran Program, which is an incredible collection of genetic samples in a massive genetic biobank. The program is made possible by hundreds of thousands of Veterans who have donated blood samples and volunteered to participate.