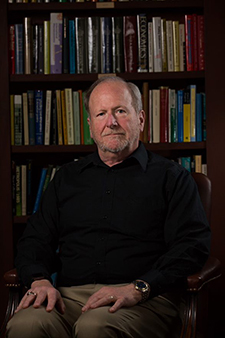 Dr. Michael Lyons, a Navy Veteran, is a research psychologist who oversees the Vietnam Era Twin Study of Aging.

Dr. Michael Lyons, a Navy Veteran, is a research psychologist who oversees the Vietnam Era Twin Study of Aging.

Dr. Michael Lyons, a Navy Veteran, is a research psychologist who oversees the Vietnam Era Twin Study of Aging, an NIH-funded project that is conducted in conjunction with VA. The project is a study of cognitive aging of male twins who served in the U.S. military during the Vietnam conflict from 1965 to 1975. He is also a professor in the Department of Psychological and Brain Sciences at Boston University and has authored more than 250 peer-reviewed articles in his four decades in the academic profession. He served in the Navy from 1971 to 1975 and earned the Vietnam Service Medal and the National Defense Service Medal, among other honors.

Shortly after I graduated from college in 1971, I received a notice from my draft board. The date of my induction into the Army was scheduled for several months later. During that period, one had the option of enlisting in another branch of the military. I was a maritime cadet during my first year in college. That experience led me to choose the Navy.

From an early age, I was interested in science. When I took my first psychology course, I discovered that human behavior was the subject matter in which I was most interested.  My areas of research are psychiatric epidemiology and behavioral genetics. I was drawn to research on psychopathology—the scientific study of mental disorders—that is empirically based and biologically grounded.

During graduate school at the University of Louisville, one of my professors, Dr. Adam Matheny, was an important mentor to me. He was the director of the Louisville Twin Study, one of the oldest, largest, and most comprehensive studies of child development related to multiple birth status. He was very smart and very funny. Coincidentally, he was also a Navy veteran, having served during the Korean War. I don’t know if there’s a direct cause-and-effect relationship, but most of the research in my career has been on twins. From 1986 to 2003, I was a research psychologist at the VA hospital in Brockton, Massachusetts, working in Dr. Ming Tsuang’s research group. Ming put together an outstanding and highly productive team of researchers. My experiences there had a profound influence on my career. 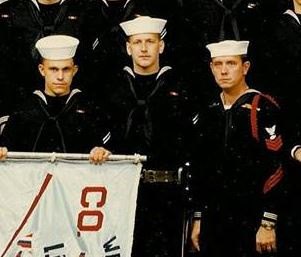 Michael Lyons (center) served on the destroyer USS Charles P. Cecil while in the Navy from 1971 to 1975.

In 1972, after boot camp and navigation school, I was assigned to the destroyer USS Charles P. Cecil. The vessel’s homeport was Newport, Rhode Island. But it was deployed to the Red Sea when I was assigned. The Navy put me on another destroyer that was going to relieve the Cecil in the Red Sea.  However, once we were underway, the Cecil left the Red Sea for Vietnam. The Navy put eight of us who were in transit to the Cecil up at a merchant seaman’s hotel in Trinidad, while they decided how to get us to the Cecil.  After a week, they flew us to Panama, where we picked up another destroyer coming through the canal on its way to the Philippines.  In the Philippines, we were assigned to a transit barracks until we were put on a ship that was going to refuel the Cecil in the South China Sea. During the refueling operation, two ships steam side-by-side at 13 knots about 50 or 75 yards apart, while large hoses transfer fuel from the tanker to the destroyer. They also stretch a cable between the ships—a “high line” personnel transfer—from which a chair is suspended and pulled across. It’s a dramatic way to come aboard one’s new ship! The Cecil then spent several months on the gun line along the coast of Vietnam providing gunfire support. My job on the ship was navigation. In those days, we didn’t have satellite navigation. So to a great extent, we depended on visual bearings and celestial navigation. I served on the Cecil for three and a half years, after which I was discharged and started graduate school.

During this era, the Navy established a program called Understanding Personal Worth and Racial Dignity (UPWARD). The program entailed conducting two-and-a-half-day seminars that addressed issues of racism. I was trained as a racial awareness facilitator and conducted seminars with my partner, a Mexican-American sailor, on board ships in our squadron. I also served as my ship’s drug abuse program advisor and collateral duty alcohol counselor.

My research investigates the influence of genetic factors on psychopathology and aging. Our group was the first to publish evidence that genetic factors play a role in vulnerability to PTSD.  In another paper, we demonstrated that a gene related to the risk of Alzheimer’s disease influences sensitivity to the effects of combat trauma on the risk of PTSD. Our current study, the Vietnam Era Twin Study of Aging (VETSA), is focused on how genetic factors influence health during the aging process, especially with regard to Alzheimer’s disease. Drs. Bill Kremen and Carol Franz of the University of California, San Diego, are the other principal investigators on this project, which is being conducted in conjunction with the Epidemiologic Research and Information Center at the VA Puget Sound Health Care System. Our research aims to provide insights into factors that determine both healthy and pathological aging.

The twins in our study have developed a strong connection with the study. For example, we recently received a message from one of our participants that his twin brother had died. He included a copy of his brother’s obituary, which described his participation in VETSA. We are deeply grateful to the twins in the study. They make a considerable effort to contribute to scientific research.

Leadership experiences in the military have been relevant for other roles during my career.  During boot camp, I was appointed recruit petty officer chief, and I served as leading petty officer for the navigation division on my ship. Those experiences were helpful when I served as chair of a large academic department at Boston University and as president of the American PsychoPathological Association.

My experience serving in the Navy has provided me with a feeling of kinship with other Veterans. I hope that our research in VETSA will provide us with knowledge that will contribute to understanding problems associated with aging and inform ways to promote healthy aging.

In VETSA, we recruit Veteran twins from all over the country and fly them to Boston to spend a day in our lab. I make a point of introducing myself to our participants, asking them about their service and informing them that I am also a Veteran. Hearing their stories and having a chance to express my thanks for their willingness to participate in our research is one of the most gratifying aspects of my work.

I believe that treating others with kindness and respect is very important and contributes to success in the long run. Persistence is a key element for success. It is important to set goals and to persist in pursuit of them.

What’s the next step for you in your research career?

My next step is to conduct the fourth wave of data collection in the Vietnam Era Twin Study of Aging. We started the study in 2002 and have completed three waves of data collection about six years apart. There are about 1,200 twins who participate in the study. We have very extensive cognitive data on our participants dating back to their induction into the military, when their average age was 19. We have collected extensive data on health, sensory functioning, and life satisfaction. All of our participants have been genotyped, and more than 400 have had MRI [magnetic resonance imaging] scans of their brains at each wave of data collection.

This advent of COVID-19 has made our upcoming wave of data collection considerably more complicated. Our normal procedure of flying subjects to Boston, putting them up in a hotel, and asking them to spend about six hours in a small testing room with a research assistant is not currently feasible. We are working hard to develop methods that will allow us to assess our participants safely.