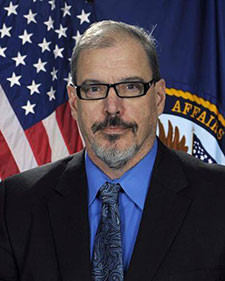 Dr. Michael Russell is a clinical psychologist and neuropsychologist at the Central Texas Veterans Health Care System in Waco, Texas. He directs the VISN (Veterans Integrated Service Network) 17 Center of Excellence for Research on Returning War Veterans. The program carries out extensive inquiries into the mental health impacts of combat exposure for military personnel who fought in Iraq and Afghanistan. A retired Army lieutenant colonel, he had a distinguished military career that spanned a quarter-century. He worked in medical support roles at U.S. bases and was deployed several times to Iraq, where he conducted research on mild traumatic brain injury. He many earned distinctions and medals for his service, including The Order of Military Medical Merit, Distinguished Member of the Regiment, the Legion of Merit, and the Meritorious Service Medal.

I believe it was a silver1984 Chrysler Laser. Seriously, the word “drove” seems to imply it was some act of desperation. I chose a military internship in psychology over other options because I felt it would better prepare me to be a forensic psychologist, which was my plan. Then, the Army offered me a post-doctoral fellowship in neuropsychology, before making me a fellowship director and a bunch of other things. Somehow, 24 years flew by, and I retired a lieutenant colonel in 2010.

My doctoral program was research-based, and I published there. But it was one of my ancillary duties that first inspired me to get serious about being a researcher. I had to perform psychological autopsies on every soldier who committed suicide in my region, and soon I had a drawer full of psychological autopsies. I put the information together, and the answers I derived from my data differed from what we had been teaching. It turned out there were problems that needed solving. Without the right data, we weren’t going to succeed. So I set out to be the Army’s suicide expert.

Of course! We all have people who help us get where we are—no one succeeds alone. Dr. Alan Marlatt, the famous researcher on addictive behaviors, such as alcoholism, helped me get into graduate school at Washington State University. Then, my major professor, Dr. Herbert Cross, helped me get through grad school. In the Army, many senior officers, foremost among them Colonel Bruce Crow, helped me tackle rougher-than-average assignments. A wealth of friends and colleagues got me into my VA career. 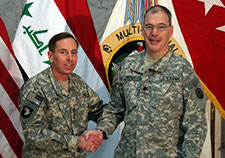 Russell (right) is pictured with Gen. David Petraeus, who commanded all coalition forces in Iraq in 2007 and 2008.

Russell (right) is pictured with Gen. David Petraeus, who commanded all coalition forces in Iraq in 2007 and 2008.

I served in the Army from 1986 to 2010. We have an Army saying: “Been there, done that, got the T-shirt.” I have a lot of T-Shirts. I’ve been the division psychologist for an infantry division, I did a fellowship at Walter Reed National Military Medical Center, and I was a fellowship director at a neurological testing laboratory in Hawaii. I was also chief of psychology at Fort Bragg in North Carolina, Fort Bliss in Texas, and Fort Hood in Texas, and I was operations officer for the 62nd Medical Group and commander of the 47th Combat Support Hospital at Fort Lewis in Washington state. In addition, I served at Landstuhl Regional Medical Center in Germany; as a psychologist for a mobile army surgical hospital, or MASH unit, during the Bosnia conflict; and in Baghdad, Balad, and Mosul on deployments to Iraq.

I’m a neuropsychologist and did the only controlled research on acute mild traumatic brain injury (TBI) during the Iraq war. I set up in the combat zone and followed people through recovery, something you could only do at the point of injury. I study the chronic effects of TBI and how it advances to the degenerative brain disease chronic traumatic encephalopathy, the same disease pro football players sometimes get. My center studies Gulf War Illness and a new concept, moral injury, which is a feeling of shame or guilt on the part of the Veteran. Our work on moral injury shows that this concept is a neglected area of treatment and may help Veterans who do not respond to standard PTSD treatments. Some Veterans may be better served with neurological care secondary to TBI and others need a different kind of care than VA is configured to offer. We need a better triage system and better prescriptive care. Being a Veteran, I’m very Veteran-focused and want to fill in the gaps I see in the care provided.

I direct the Center of Excellence for Research on Returning War Veterans, which is appropriate because I’m a returning war Veteran. My research is informed by my military experience.

I’m certain we can make life better for Veterans. The United States often trails the rest of the world in adopting new techniques and procedures because of the complexity of our regulatory system and the requirement that clinical trials be conducted in America. If there’s no great profit to be had, then only the government will spend the time and money to conduct these required studies. My favorite example of this is lithium carbonate for the treatment of manic depressive illness. It was used in Australia starting in 1949, but it wasn’t FDA-approved in the U.S. until 1970. People suffered needlessly for more than 20 years, mainly because a simple salt couldn’t be patented. We have the same situation today with transcranial magnetic brain stimulation. Israel and Europe have been using that procedure for PTSD treatment for years, but it’s off-label in the U.S. It’s a life-saving treatment. We’re trying to correct this with American studies of effectiveness for this mode of treatment.

It isn’t enough to just be smart. IQ accounts for far less than half the variance in success. I’ve found that many people are good at starting things but not so good at finishing them. To be successful, you’re usually measured on the ability to produce a finished product, not on good intentions or aborted attempts. I also think successful people learn the value of listening to people who think differently from themselves. Living in bubbles leads to stale discussions and a lack of progress. I try to balance my teams with different types of people and am looking for people who see the world differently, because those people are likely to complement my skills rather than just repeat my skills. For motivation, it’s important to keep sight of the big picture and see how the mundane or boring task you may be doing now contributes to the end goal, which is important and noble and good and advances humanity. However, if you can’t make that connection, a course correction might be in order!

I’m a GS-15 lab director and intend to make my lab the most successful in VA history, while producing tangible products of use for our Veterans. If I can accomplish that, I’ll have been a complete success.