In June 1991, Dr. Millie Hughes-Fulford flew on NASA’s first space mission dedicated to biomedical studies. The VA molecular biologist spent nine days aboard the shuttle Columbia, conducting experiments on the effects of space travel on humans. She and her crew flew more than 3 million miles while orbiting the Earth nearly 150 times, acquiring more medical data than any prior NASA flight. 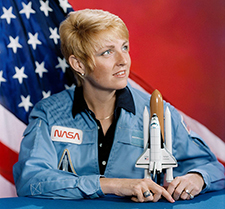 Dr. Millie Hughes-Fulford became the first female payload specialist to take part in a NASA mission when she flew aboard the shuttle Columbia in 1991. (photo courtesy of NASA)

Dr. Millie Hughes-Fulford became the first female payload specialist to take part in a NASA mission when she flew aboard the shuttle Columbia in 1991. (photo courtesy of NASA)

The research shaped the rest of her career. Upon returning, she established the Hughes-Fulford Laboratory at the San Francisco VA Health Care System. The lab conducted experiments about the impact of weightlessness on astronauts’ immune systems and the loss of bone mass.

That work led to studies on the effects of space flight on bone and T-cell dysfunction on later shuttle and Space-X missions and at the International Space Station. T cells are important white blood cells of the immune system and play a key role in immune response.

‘The osteoporosis of aging’

Her space research benefited Veterans and other people, too.

“Dr. Hughes-Fulford realized that understanding the mechanisms of space flight that lead to suppression of the immune response might help in understanding the fading immune response with aging,” says Dr. Carl Grunfeld, associate chief of staff for research and development at the San Francisco VA. “The National Institute on Aging agreed and funded her studies. She also hoped her studies on space flight and bone would help us better understand and treat the osteoporosis of aging,” a condition when bones become fragile and brittle.

It’s all part of her legacy. Hughes-Fulford died in February 2021 at age 75 following a long battle with lymphoma, a cancer of the lymph nodes. The VA researcher and trailblazing NASA scientist also served in the U.S. Army Medical Corps from 1981 to 1995, achieving the rank of major, and was a professor of medicine at the University of California, San Francisco (UCSF).

Millie Elizabeth Hughes was born in 1945 in the small Texas town of Mineral Wells. A lover of science fiction and outer space from a young age, she majored in chemistry and biology at Tarleton State University, which later became part of the Texas A&M system. She graduated near the top of her class in 1968 and enrolled at Texas Woman's University in Denton, earning a doctorate in biochemistry in 1972. She completed a post-doctoral fellowship in cholesterol metabolism at what is now the UT Southwestern Medical Center in Dallas.

Subsequently, she applied for 100 academic jobs around the country and received four responses. She accepted a lab position at Southwestern Medical Center, which eventually relocated to the VA hospital in San Francisco.

Hughes-Fulford was eventually recruited to run a lab at the San Francisco VA. Her early work involved how kidney failure and diabetes disturbed cholesterol metabolism. She later broadened her focus, carrying out studies of how inflammatory molecules affect cancer growth and bones. 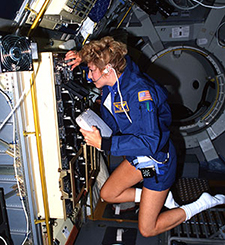 Hughes-Fulford, a molecular biologist, conducted research in her career that benefited astronauts, Veterans, and other people. (photo courtesy of NASA)

Hughes-Fulford, a molecular biologist, conducted research in her career that benefited astronauts, Veterans, and other people. (photo courtesy of NASA)

In 1978, Hughes-Fulford answered an ad in Family Circle magazine seeking candidates to become the first American woman in space. She made it to the final 20 among 8,000 applicants, before Sally Ride was chosen to ride aboard the shuttle Challenger in 1983.

Despite not getting that job, Hughes-Fulford continued to pursue her passion for space travel. NASA accepted her into its astronaut program as a payload specialist, an astronaut trained to handle highly complex or classified equipment aboard a space shuttle to conduct experiments in space.

In 1984, Hughes-Fulford took a leave of absence from VA and UCSF and moved to Houston to work with NASA on Spacelab, a reusable laboratory that was used for many missions in conjunction with the space shuttle. The deadly explosion of the Challenger in 1986 delayed her entry into space. But in 1991, she became the first female payload specialist to take part in a NASA mission aboard the Columbia.

Of her flight into space, Hughes-Fulford once said, “It was a life’s dream, and not many of us get [to realize] our life’s dream.”

More than 120 papers and abstracts

Her experience as the first female working scientist to travel in space caused her to shift her focus to the effects of weightlessness in space flight. While she was invited to go on other flights, she preferred to conduct research to inform future experiments in space through the lab that bears her name at the San Francisco VA.

Over the years, Hughes-Fulford contributed to more than 120 papers and abstracts on T-cell activation and bone and cancer growth. She long served as a scientific advisor to the VA undersecretary and continued to study the effects of weightlessness after becoming ill. She was working on papers and grants at the time of her death.

“Millie was an absolute delight to work with,” Grunfeld says. “Her enthusiasm for science was infectious, and she was always willing to talk to groups–especially young people and women–to encourage them to pursue careers in science. She was also an inspiring mentor to dozens of faculty members at UCSF and around the country.”