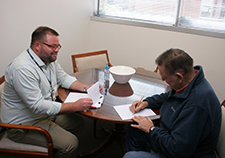 Dr. Paul Arthur, an affiliated researcher at the North Florida/South Georgia Veterans Health System in Gainesville, Florida, uses applications and theory in real-world settings to help Veterans with dementia and their caregivers.

Dr. Paul Arthur, an affiliated researcher at the North Florida/South Georgia Veterans Health System in Gainesville, Florida, uses applications and theory in real-world settings to help Veterans with dementia and their caregivers.

For someone only 35 years old, Dr. Paul Arthur has a deep resume highlighted by his vast experiences in the military and as a VA researcher. He's now an affiliated researcher at the Center for Innovation on Disability and Rehabilitation Research at the North Florida/South Georgia Veterans Health System in Gainesville, Florida. He focuses on the use of applications and theory in real-world settings to help Veterans with dementia and their caregivers. Most recently, he was a key part of the study "Nonpharmacologic Management of Challenging Behaviors in Veterans with Dementia," which addressed the challenges of managing the neuropsychiatric symptoms that are a hallmark of dementia. In addition to being a VA researcher, he's a combat Veteran who led a unit that provided psychological and suicide prevention help to service members in Iraq and stateside. After a dozen years in the military, he left the service in 2012 to pursue a doctorate in rehabilitation science at the University of Florida. He's now an assistant professor at St. Catherine University in Minneapolis.

Arthur: I was a freshman in college on September 11, 2001. My mom called and told me to turn on my TV: "We are being attacked." I remember it like it was yesterday. The university didn't cancel my math test (I did quite poorly). I had always had the military in the back of my mind, but after 9/11, it was a much more salient choice.

In my undergraduate and masters-level work, there were a number of key professors that invested extra time in my development and fostered my appreciation for research, be by inviting me to work in their labs or in recommendations to participate in competitions and committees. Coming out of high school, I was not a strong student. Extraordinary faculty saw beyond my weaknesses and empowered me by highlighting my strengths.

My parents are both lifelong learners. As the youngest of three boys, I was born to parents with technical degrees, mom in nursing, and dad in diesel mechanics. After getting us through the elementary years, they both continued their education to post-bachelor levels. That gave me some motivation. After all the military training, I was no longer a "traditional student." I looked to my parents' example as to what remains possible.

I enlisted in the Army Reserves on Nov. 15, 2001. I trained as a combat medic and occupational therapy assistant. I had no idea what occupational therapy was. It was either that or "dental assisting." After nearly two years of training, I returned home to resume my undergraduate degree. I learned of the Reserve Officers Training Corps [ROTC] and joined to continue my military development while in college. Upon graduation, I was commissioned as a second lieutenant in the Medical Service Corps. Operation Iraqi Freedom and Operation Enduring Freedom were both very active by that time, and I recognized the likelihood I would soon deploy. Despite that, I went ahead and started a master's program in occupational therapy. I almost finished my first semester when I received orders to deploy to Iraq with a behavioral health company. By that time, I was the executive officer and we had been training to replace two outgoing units and cover two-thirds of Iraq for psychological support. Our orders were for 400 days, and the Army used every one of them. Upon return, I was appointed as company commander and served in that role while completing my masters-level education in occupational therapy and gerontology. After command, I was transferred to a medical brigade staff position, where I served until leaving the service in 2012 for my doctoral education. 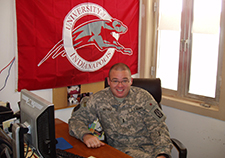 Dr. Paul Arthur, an Army Veteran, enlisted in the military after the U.S. was attacked on 9-11. He led a unit that provided psychological and suicide prevention help to service members in Iraq.

Dr. Paul Arthur, an Army Veteran, enlisted in the military after the U.S. was attacked on 9-11. He led a unit that provided psychological and suicide prevention help to service members in Iraq.

The central motivating theme of my research is: the use of applications and theory in real-world settings to assist persons with dementia and their caregivers. Rehab inventions have historically focused on four broad areas in dementia: cognition (can we slow it down), function (can we increase independence), behavior (can we reduce the bad ones), and quality of life (can we improve it). We have not spent enough time with caregivers and persons with dementia to determine which outcomes they find most important. My research follows an iterative process where I'm seeking to identify those outcomes and use them to inform the design and conduct of feasibility and pilot work. Ultimately, I believe we can change the way we treat dementia in rehabilitation by revisiting the drawing board and including the very stakeholders in the design and conduct of our research. Work in this area is particularly transferable between Veteran and non-Veteran populations. We just completed an HSR&D-funded trial with 160 Veterans with dementia and their caregivers. Preliminary results suggest that they respond to interventions similar to non-Veteran populations.

My military experience certainly opened the door for my participation in VA research. I think it likely also made it less intimidating. I've spent my entire adult life in a federal government environment and went in with knowledge of the benefits and costs of working with VA.

Caregiving in the VA can be tricky due to congressional mandates associated with some of the interventions and support the VA can offerâ€”for example, different benefits for different service periods. That said, there is particular promise in using Veteran-identified outcomes in addressing quality of life.

After spending the last four years in the homes of 160 Veterans with dementia, I can tell you beyond the anecdotal that it does. It is an extraordinary task to pull Veterans from the military mindset of "adapt and overcome." It's easy to let the "federal machine keep rolling" and adapt to the changes, but I think much more can be learned by stopping and asking Veterans "what do you think?"

Life is full of challenges, but few of them can ultimately resist continuous momentum. Keep pushing the rock, as we say around here.

I am currently working to complete manuscripts from our dementia trial, and I look forward to more opportunities to drive VA research in a Veteran-centered manner to answer questions that are the most important to those whom we are honored to serve.