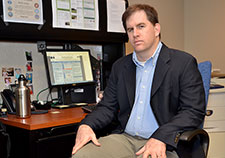 Dr. Racine Brown is a post-doctoral fellow at the James A. Haley Veterans’ Hospital in Tampa, studying the metabolic effects of traumatic brain injury. (Photo by Ed Drohan)

Dr. Racine Brown is a post-doctoral fellow at the James A. Haley Veterans’ Hospital in Tampa, studying the metabolic effects of traumatic brain injury. (Photo by Ed Drohan)

Dr. Racine Brown is a post-doctoral fellow at the James A. Haley Veterans’ Hospital in Tampa. He’s involved in research that is based largely on the VA TBI Model System. The initiative produces data that are intended to assist VA in planning for care and support of the many Veterans and families affected by traumatic brain injury (TBI). He served in the Marines for four years and was awarded a Navy Marine Corps Achievement Medal by his commanding officer for superior performance as an infantry officer.

It’s hard to say. I certainly wanted to serve my country and learn leadership and other skills. But a large part of my desire to serve was an inner drive to challenge myself and do my part. Many men in my immediate and extended families served in the military. I didn’t want to break the tradition.

Ever since I can remember, I’ve been interested in science and learning. I was interested in biology in high school but decided to major in anthropology for my bachelor’s degree at Wake Forest University. While serving in the Marines, I found moments to think about what I wanted to do long term and decided on some sort of social science research that would have a positive impact on the world. Toward the end of my tour, I decided on graduate school and subsequently attained a master’s degree in anthropology at the University of South Carolina and a doctorate in applied anthropology at the University of South Florida.


Did you have mentors who inspired you in life, the military, and-or in your research career?

My first mentor was my father. He was a clinical psychologist and state government official who was an authentic and benevolent presence in government and professional circles in the Columbia, South Carolina area. He taught me a great deal about the importance of character and perspective. In the Marines, I would say my most important mentor was Stuart Lankford, who was first a captain then a major during my tour. Major Lankford was my company commander and later my supervisor when he was the operations officer and I was the training officer for our battalion. He taught me the importance of persistence and thoroughness in carrying out one’s duties. He also illustrated the importance of attention to detail in a way no one had for me before. In research, I’ve been inspired by anthropologists Dr. Tom Leatherman and Dr. David Himmelgreen. They taught me how to apply theories about the interplay between cultural and biological well-being to designing, conducting, and writing actual studies. In VA, post-doc mentor Dr. Risa Nakase-Richardson, a clinical research neuropsychologist at the Tampa VA, has taught me a great deal about leading, administration, and logistics for research teams and studies. 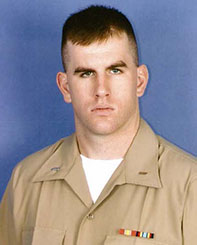 Brown served four years as an infantry officer in the Marines.

I was an infantry officer in the U.S Marine Corps from 2000 to 2004. I served in an infantry battalion as the commander of a platoon of up to 40 Marines and as a training officer in the operations section for a battalion of up to 900 Marines. After my initial schooling at the Marine Corps Base in Quantico, Virginia, I was stationed in Kaneohe Bay, Hawaii. I was also on two rotational deployments to Okinawa, Japan, on the unit deployment program, as well as smaller details in Sri Lanka and India. I was first a platoon leader, then a staff officer in the operations section of an infantry battalion. I learned a great deal about leadership and the coordination of activities during this time. I also learned how to accomplish difficult tasks when everyone was tired, sleep-deprived, and dirty.

I am currently researching the relation between traumatic brain injury and obesity with the VA TBI Model System research platform. This research is important because co-occurring diseases, such as obesity, could negatively impact acute rehabilitation and long-term outcomes for Veterans who sustain a TBI. Ideally, this research program could improve weight-related services and outcomes for Veterans with TBI. My goal is to use the work I’m doing now to launch a broad program of research on brain injury and metabolic health co-morbidities.

There’s no direct connection between my current research and what I did in the Marines. But the fact that my military experience was less eventful than for many recent Veterans has inspired me to want to give something back to Veterans, particularly those most in need of care.

To do so is my utmost goal in VA research. While one cannot know the impact of a study until data collection and analysis are concluded, I will always stay focused on my long-term goal of achieving a better quality of life for Veterans. On further reflection, a null result could have value too, as it might help research teams focus on other areas of inquiry that may benefit Veterans.

Yes on both counts. My military and Veteran experience amplifies in my mind the importance of health research to benefit Veterans. I also have insight into the Veteran experience of VHA health care because my own experience is similar in some ways. I cannot speak from direct experience about combat. But I work with the full knowledge that my experience could have been very different if I had not ended active service six months before my battalion was joined to a Marine expeditionary unit and deployed to Iraq. I can relate to some of the challenges of re-adjusting to civilian life after being in the Marines for four years and to the high operational tempo many Veterans faced in the armed services. My battalion experienced a high-op tempo in training operations and deployments, and also sent subordinate units on real-world security details.

Preparation, flexibility, and perseverance are essential. While in graduate school, as a research project manager at the Tampa VA, and in my current post-doctoral fellowship, I’ve learned the importance of reaching out to build networks, being willing to help with things outside one’s immediate job description, and being on the lookout for opportunities.

I am working on a Career Development Award application and other grants related to the research that I’m focused on, including the VA TBI Model System.