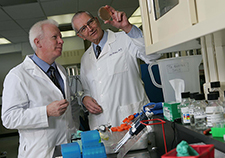 Dr. Stuart Johnson (left), seen here with his mentor and colleague Dr. Dale Gerding, is an infectious disease clinician and researcher at the Edward Hines Jr. VA Hospital in Illinois.

Dr. Stuart Johnson (left), seen here with his mentor and colleague Dr. Dale Gerding, is an infectious disease clinician and researcher at the Edward Hines Jr. VA Hospital in Illinois.

Dr. Stuart Johnson, an Air Force Veteran who served during the Vietnam War, has crafted an accomplished medical career of nearly four decades. He’s an infectious disease clinician and researcher at the Edward Hines Jr. VA Hospital in Illinois and a professor of medicine at Loyola University in Chicago. His main research interest is in the epidemiology, pathogenesis, and treatment of the infection Clostridium difficile (CDI). The pathogen can cause colitis, which is inflammation of the inner lining of the colon, and major morbidity among Veterans and other patients who are exposed to it. These patients are susceptible usually because of antibiotic treatment for a different infection, especially in the health care setting. Johnson feels privileged to be able to give back to his fellow Veterans and to help address important questions that influence the well-being of Veterans suffering from infectious diseases, including CDI.


Johnson: I drew number 13 in the draft lottery in 1970. This was at the tail end of a very unpopular war, and I was not particularly looking forward to military service. However, I was an unfocused college student at the time, and my time in the military turned out to be a very formative and positive experience. In addition to the discipline instilled in me during basic training, my exposure to the multiple backgrounds of my fellow servicemen and the people in the countries where I was stationed ultimately motivated me to pursue a career in medicine. My first inclination of becoming a physician occurred while stationed in northeast Thailand.

After discharge from the service, I went back to Minnesota highly motivated to finish college and go to medical school. After completion of medical school and an internal medicine residency, I returned to Thailand to work in a refugee camp and study tropical medicine at Mahidol University. While in Thailand, I met Dr. Peter Echeverria, a lieutenant colonel in the Army Medical Corp. He was chief of bacteriology at the U.S. Army Medical Component, Armed Forces Research Institute of Medical Sciences. Peter invited me to help with an outbreak investigation of a disease that was affecting children at a refugee camp along the Thai-Cambodian border. This was my first exposure to research. Our investigation documented a rare disease called “Pigbel” as the origin and led to vaccination of the children at risk in this camp.


Did you have mentors in your youth or at any other time who inspired you in life, the military, or in your research career?

Dr. Echeverria, a lieutenant colonel in the U.S. Army, was highly instrumental in starting my research career. In addition to being intense and highly driven, Peter was incredibly generous and willing to share his love of epidemiology and bacteriology with me. Subsequently, Dr. Dale Gerding, a longtime VA-funded investigator, mentored me in research involving my current focus, Clostridium difficile. I have worked with Dale now for more than 30 years on this disease, and I would not be where I am without him. Dr. Gerding and I are highly grateful to VA for sponsoring our research and facilitating our research careers. 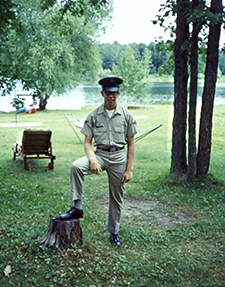 Johnson is seen at his parents’ home in Minnesota in the early 1970s, during leave from his Air Force post in Asia.

Johnson is seen at his parents’ home in Minnesota in the early 1970s, during leave from his Air Force post in Asia.


Describe your military service. When and where did you serve? What did you do?

I served in the U.S. Air Force from 1971 to 1975. I was stationed in Okinawa, Japan, and in Thailand. I served in the security service monitoring radio communications and working with decryption during the Vietnam War.


What type of research are you involved in? How does your work potentially impact Veterans? What do you hope to accomplish?

My clinical experience in the treatment of patients with recurrent Clostridium difficile, or “C. diff,” has translated into studies on helping to define management of these infections. I’m now the co-principal investigator of a multi-center study funded by the VA Cooperative Studies Program that is designed to define optimal management of early recurrences of CDI. This trial, “Optimal Treatment for Recurrent Clostridium difficile Infection,” will involve 24 VA medical centers around the country over the next four years and will randomize patients to one of three antibiotic treatments. The trial represents the largest and most rigorous study of recurrent CDI ever conducted and should produce high-quality evidence that can guide treatment recommendations for this disease. In addition to CDI, I’ve been involved in clinical research on the parasite Angiostrongylus cantonensis, which is responsible for most cases of eosinophilic meningitis worldwide. That is another example of an influence of mine dating back to my time in the Air Force while stationed in Southeast Asia.


How do you measure success in your research?

Although grant receipt and publication in high-quality journals are the usual metrics for academic success, I have the additional advantage and privilege to care for patients with Clostridium difficile. It is most gratifying to see a patient finally recover after multiple bouts of recurrent CDI.


Does being a Veteran give you a stronger emotional tie to the work you’re doing? Does it give you more insight into Veterans’ needs?

My experience in the military, particularly at a time when it was unpopular and when no one was saying “thank you for your service” after we came home, helps me bond with many Veterans disaffected by wars and society.

I would suggest to any young investigator or potential researcher to keep your ears open for opportunities and look for mentorship and collaboration. I was first invited to help with an investigation of a disease in Thailand, “Pigbel,” that was caused by a clostridial bacterium, Clostridium perfringens. When I returned to the states and started my infectious disease fellowship training, I was invited to work on another clostridial pathogen, Clostridium difficile. It seemed like a natural progression and serendipitous at the time, but it has led to a very rewarding career.

I hope to see successful completion of our multi-center trial of optimal treatment for patients with recurrent Clostridium difficile. I look forward to passing the torch to younger investigators willing to tackle this ongoing disease.