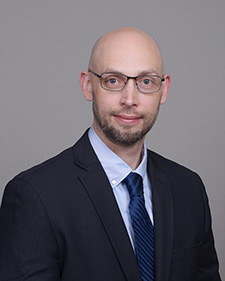 Tim Strebel, an Army Veteran, is a computer program analyst with a concentration in health informatics at the Washington DC VA Medical Center. He leverages information technology to improve access to health care and clinical outcomes, for example, through artificial intelligence, which uses computers to simulate human thinking and predict outcomes. In collaboration with VA’s National Artificial Intelligence Institute (NAII), he developed a tool that uses artificial intelligence to provide mortality estimates on COVID-19 patients. The tool is currently being piloted at 13 VA sites. He served for nine years in the Army (2006 to 2015) mainly as a logistician, with two tours in Iraq and Afghanistan. He earned a series of medals and decorations, including the Army Commendation Medal, the Army Achievement Medal, the Parachutist Badge, and the Global War on Terrorism Service Medal.

Being an achiever has been a personality trait of mine for as long as I can remember. I viewed the military as an opportunity to challenge myself and grow immensely. In 2005, I moved to Alaska to live with my brother, who was a defense contractor at Fort Elmendorf. He introduced me to many of his co-workers, some Army, some Air Force. After hearing about many of their experiences and achievements overseas, I became eager to join.

Quite frankly, I had no intention of engaging in research. But I’m glad I did. My fascination with computer science and artificial intelligence led me to a partnership with NAII. The COVID-19 algorithms I developed with NAII were all a circumstance of my interest to learn the art of machine learning, which is a form of computerized data analytics. I’m a 100% self-taught software engineer and data scientist. Every time I learn something new, I like to find a project that allows me to apply what I learn. After showing my initial work with the COVID-19 algorithms to NAII Director Dr. Gil Alterovitz, he thought it would be a good idea to help provide me with the necessary resources to complete my algorithms and then translate my work into research. I have since applied for a master’s program in data science at the University of Michigan, which I will start next fall if all goes well.

I absolutely have met people throughout my life who have inspired me to push myself outside of my comfort zone. My time spent with the 19th Special Forces Group in the Army National Guard was an extremely formative time in my life. That is where I learned how to dig deep and work hard for the sake of things greater than myself.

One of my most memorable mentors was Sgt. 1st Class Anthony Berge, who taught me the value of overcoming my fear of failure. During my time spent working under him in communications, I wore many hats. I was a logistician, network engineer, satellite dish operator, data analyst, and leader. It wasn’t that I had an interest in each of these jobs. It was just that we needed someone to do them. Rather than telling our command that we couldn’t do them because we didn’t have the right people, he taught me through his example that we could become the right people if we weren’t afraid to try.

We read instruction manuals, attended trainings, and experimented until we figured things out. In fact, I was 100% self-taught in my final duty position in the military as a satellite dish operator. Other satellite dish operators who joined our unit later expressed how impressed they were that I could set up every single dish in our inventory to standard. They wondered why they even spent six months in Georgia learning how to do the job when I could learn how to do it in just a few months.

After the military, I joined VA as a purchasing agent for the Prosthetic and Sensory Aids Service. I carried my enthusiasm for outside of the box thinking and self-teaching into my career. I began programming to automate many of my daily required tasks. In 2016, I formally released a tool I built in Excel that could automate a lengthy home oxygen billing process that reduced three weeks to a few hours. This tool has freed up countless hours of valuable administrative time that can be paid forward to our Vets by allowing it to be spent procuring critical medical devices for Veterans.

David Hook, who worked in prosthetics at the VA Long Beach Healthcare System at the time, heard about my tool and wanted to meet me. At the time, I was in an internship in prosthetics and was able to complete a site visit at Long Beach, where I met David. Ever since, he has inspired me to build bigger and better tools for VA. Since meeting David, he and I have worked together to build software and analytic tools that are still being used to this day. These tools increase the expedience and quality of care we provide at VA. Two of our software projects have won VA’s Diffusion of Excellence Shark Tank Award for innovative practices and one of those two has won the Gears of Government Award. The latter recognizes people and teams in the federal workforce whose dedication supports exceptional delivery of key outcomes for the American people. 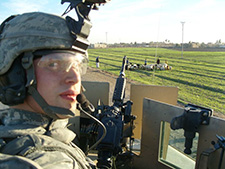 Tim Strebel in his first combat tour to Iraq at Camp Anaconda, a central hub for U.S. forces in the country. He served as a supply convoy machine gunner in the Army's 101st Airborne Division.

Tim Strebel in his first combat tour to Iraq at Camp Anaconda, a central hub for U.S. forces in the country. He served as a supply convoy machine gunner in the Army's 101st Airborne Division.

In 2006, I went to a recruiting office to join the Army National Guard. During my career, I’ve completed airborne school, two combat tours in Iraq and Afghanistan, and two overseas training missions: Operation Foal Eagle in South Korea and Operation Cobra Gold in Thailand.

In my military career, I have shown to be a jack of all trades. I started my career as a combat engineer for the Alaska National Guard at Fort Richardson. I deployed as a convoy machine gunner to Iraq and as a logistician to Afghanistan. Between deployments, I can hardly think of a year that went by in which I maintained the same occupation. I even had the opportunity to undergo an explosive detection K9 program at Auburn University in Alabama in 2011 to test the school’s genetically enhanced vapor wake canines.

The primary focus of my research is centered on how artificial intelligence can be used to improve the quality of care that we provide at VA and in health care at large. I want to understand what areas we can get the most out of the technology. Whether it’s being used as chatbots to simulate real conversations for clinical reminders; to help us identify which parts of our Veteran population are most at risk for specific diseases; or to help us optimize our clinical management processes to increase access, I want to know where these opportunities exist and which AI methods and algorithms are effective and ineffective.

I think in a very indirect manner it did. When I reflect on my time in the military, I see it essentially as a giant experiment to find out what I was passionate about in life. I learned the value of suspending my judgment about things until I tried them. As I mentioned previously, I held many occupations during my career that I learned how to do through self-teaching—basically trial and error. I have applied the same approach to my work at VA. That has led me to create real solutions that have benefited Veterans.

In my opinion, VA needs more people willing to try new things, so we can break free from the bondage of doing things the way we’ve always done them. I can’t tell you how many times I’ve encountered antiquated processes during my time at VA just to hear, “This is the way we’ve always done it” as an excuse not to use newer and more efficient methods. VA is the largest health care system in the world and has led the development of many amazing discoveries. Despite VA’s achievements, there are still huge opportunities to modernize our existing systems to better serve our Veteran population.

I’m thrilled at this opportunity and have enjoyed a wonderful career of almost seven years serving Veterans. Right now, I’m an affiliate of the National Artificial Intelligence Institute. To be able to expand my talents into NAII through its partnership with the DC VA is an exciting prospect that I’m honored to take advantage of.

I spent over nine years of my life in the military not only serving in combat zones but working diligently to support others who bore the brunt of the battle. It has long been my life’s mission. I carry the same enthusiasm and fervor into my work at VA. When you live through something so formative as the military for so long, you can’t help but have emotional ties to it. It’s such a vastly different way of living compared to civilian life. I won’t get into all the aspects of it, but when I interact with fellow Veterans knowing that they understand the lifestyle, sacrifice, and culture that comes with the military, it’s as though we’ve known each other for a long time.

I would love nothing more than to become one of the first generation of VA data scientists. I’m extremely fascinated at the prospect of using artificial intelligence to improve our organization. This emerging technology in its infancy, tethered with the vast amounts of untapped data we have at VA, presents a wealth of opportunity to contribute to transforming our organization for the better. I will continue to develop my talents as a researcher and AI practitioner and advance them to help serve our Veterans.