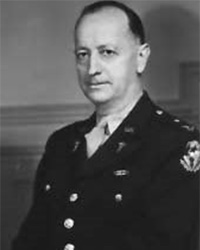 Dr. William S. Middleton was a renowned internist and military physician who served as VA’s chief medical director from 1955 to 1963.

While in that influential role, he led the development of Veterans’ programs that included improved access to physical rehabilitation services, mental health care, and treatment for cardiovascular diseases. He directed 130,000 staff members, including 4,000 doctors and 15,000 nurses working at a total of 171 hospitals and 93 out-patient clinics.

Today, the William S. Middleton Award (Middleton Award) is the highest honor presented by the Biomedical Laboratory Research and Development Service in VA’s Office of Research and Development. Established in 1960, the annual award honors senior VA biomedical research scientists for their outstanding achievements in biomedical and bio-behavioral research relevant to the health care of Veterans. Middleton Award recipients have achieved international acclaim for their accomplishments in areas of major importance to VA's research mission.

Born in Norristown, Pennsylvania, in 1890, Middleton graduated from Norristown High School in 1907. Curious and intelligent, he entered medical school at the University of Pennsylvania before an undergraduate degree was required for medical school admittance. He earned his medical degree in 1911 and, after an internship at the Philadelphia General Hospital, he joined the University of Wisconsin medical school faculty in 1912 as a clinical instructor of medicine. In 1926, he established an innovative program of “preceptorships” at the university that remains to this day. In the program, senior medical students work with community practitioners in Wisconsin as a prelude to an internship.

During World War I, Middleton served as a general medical officer with the American Expeditionary Forces in France. He remained in the U.S. Army Reserve after the war and became an advisor to the U.S. Army Medical Corps before the U.S. entry into World War II.

When the U.S. entered the war, Middleton was recalled to active duty as the chief consultant in medicine in the European theater. He and his Army counterpart-consultant in surgery, Dr. Elliott Cutler, shaped the process for the care of sick and injured American soldiers in Europe. Middleton also cared personally for several high-profile, high-ranking officers in the American and British armies. He reached the rank of colonel in the Army Medical Corps and received the Legion of Merit with Oak Leaf Cluster, the Distinguished Service Medal, the Croix de Guerre with Palm, and the Order of the British Empire.

During the Korean War, Middleton was a special advisor to the U.S. surgeon general.

Starting in 1922, Middleton was involved in Veterans’ health care when he began in the U.S. Veterans Bureau—a predecessor to VA—as an attending physician in tuberculosis. He later served as a member of the National VA Medical Advisory Committee and was appointed dean of the University of Wisconsin medical school in 1935, a position he held for 20 years. In 1946, he became an original member of VA’s first special medical advisory group, which was key to creating VA’s medical school affiliation program.

In 1955, President Eisenhower appointed Middleton chief medical director of VA’s Department of Medicine and Surgery. He was 65 years old at the time. Upon his retirement in 1963, President Kennedy recognized him for his years of public service and his contributions to the medical field.