This year, National VA Research Week, May 11–15, focuses on "Empowering Veterans Through Research." Since 1925, VA researchers have been discovering new ways to treat disease and improve Veterans' health. VA has a proud history of conducting high-quality clinical trials that benefit the nation. That mission is especially relevant during the COVID-19 pandemic.

VA continues to be at the forefront of research targeted to Veterans, investigating the use of telehealth technologies, suicide prevention strategies, new ways to address traumatic brain injuries, and mental health interventions, among others. 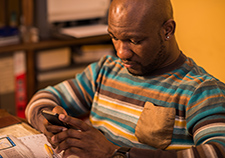 (Photo for illustrative purposes only. ©iStock/BraunS)

Researchers surveyed about 600 tablet recipients about their experiences with telehealth. Satisfaction with the tablet program was high. Almost a third of patients said they preferred virtual care to in-person visits, while 36% said care was "about the same." Patients were more likely to prefer video visits if they felt uncomfortable in a VA setting, had communicated well with their doctor, had substance use disorder, or lived in a place with better broadband coverage.

Patients with more chronic conditions were less likely to prefer video visits. The results will help identify which patients would benefit from virtual care, say the researchers.

Photo for illustrative purposes only. ©iStock/PeopleImages

VA researchers at the Durham VA Health Care System found spiritual difficulties in Veterans were linked with increased thoughts of suicide. Researchers collected data on religion and spirituality for 1,000 Iraq and Afghanistan Veterans.

The study found that a perceived lack of control and problems with self-forgiveness increased the risk of suicidal thoughts in Veterans. Perceived punishment by God and a lack of meaning or purpose in life significantly increased the risk of suicide attempts. The researchers suggested that screening for spiritual difficulties, possibly in collaboration with chaplains, could help detect Veteran suicide risk.

The Translational Research Center for TBI and Stress Disorders (TRACTS), is focused on understanding the long-term impact of TBI on the health of post-9/11 Veterans. TBI is considered to be a signature injury for Veterans who have served in Iraq and Afghanistan. Most TBI injuries are considered mild. But even mild TBI, also known as a concussion, can involve headaches and long-term effects on thinking, sleep, mood, balance, and memory.

The ultimate aim of TRACTS is to help heal Veterans. Researchers want to produce clinical findings that lead to new diagnostic techniques and treatments. Currently, TRACTS researchers are pursuing a series of studies that examine therapies that include medication, cognitive behavioral therapy, and brain stimulation.

VA researchers have used data from the TRACTS long-term cohort study to produce more than 100 published papers on traumatic brain injury (TBI) and its accompanying conditions and potential treatments.

In the largest study, Dr. Catherine Fortier of the Boston VA is leading research on the effectiveness of a program called "STEP-Home," which is a workshop open to all Veterans who are having trouble reintegrating into civilian life following deployment.

The image shows a donor liver being kept viable for transplant with a device developed in part by VA researchers. (Photo courtesy of TransMedics)

VA researchers and colleagues invented technology that will increase the number and effectiveness of organ transplants. Working with the company TransMedics, Inc., VA researchers developed a technique called "warm perfusion," which keeps donor hearts and other organs alive using an artificial circulatory system, until they can be transplanted.

The donor organ is connected to a warm perfusion device that pumps a continuous supply of oxygenated blood and electrolytes, while the organ is outside the human body. The device also maintains temperature and pressure within the organ. The technique was patented by VA and licensed to TransMedics, which developed the technology.

TransMedics makes warm perfusion machines for heart, lung, and liver transplants. The heart and lung machines are approved for use in the United States by the Food and Drug Administration, while the liver machine is currently in clinical trials.

In a U.S. first, Duke University surgeons in 2019 used warm perfusion to revive a heart and transplant it into a patient. The transplant recipient was a U.S. Veteran who received the heart through the MISSION Act. The procedure was first performed in the United Kingdom in 2015. Warm perfusion has now been used multiple times in Australia and parts of Europe.

Many transplant organs come from organ donors who are declared brain-dead. Once family consent is obtained, machinery is used to keep the donor's heart pumping, by oxygenating the blood. After an organ is surgically harvested, it is typically placed into cold storage until it can be transplanted into a host. However, organs deteriorate rapidly on cold storage. Without this new technology, donor tissues are only viable outside the body from six to 30 hours, depending on the type of organ. Warm perfusion extends this time from six hours to 12 hours for donor hearts.