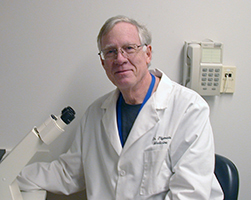 Dr. Stephen Plymate, an endocrinologist at the VA Puget Sound Health Care System and associate director of the Geriatric Research Education and Clinical Center, has received the 2020 William S. Middleton Award. It is the highest honor conferred by the VA Biomedical Laboratory Research and Development Service.

The Middleton award recognizes Plymate’s groundbreaking contributions to VA research, particularly the field of prostate cancer and its treatment. Prostate cancer is the second most common cancer among men and the leading cause of male cancer deaths. For over 28 years, Plymate has worked to help clinicians better understand which patients will respond to specific prostate cancer treatments, and to develop new drug therapies.

“Dr. Plymate’s work has made a significant, real-world impact in an area that is especially relevant to Veterans' health,” said Dr. Rachel Ramoni, VA chief research and development officer. "His work confirms VA's commitment to excellence in research and treatment of diseases affecting Veterans and patients worldwide."

Specific areas of investigation for Plymate include:

Plymate is a professor of endocrinology in the department of medicine, director of prostate cancer endocrinology, as well as a founding member of the Institute for Prostate Cancer Research at the University of Washington School of Medicine and Fred Hutchison Cancer Research Center. He is also is also a Veteran himself, having retired at the rank of Colonel from the U.S. Army after 24 years. He has over 230 publications in peer-reviewed journals and is internationally known for his work.