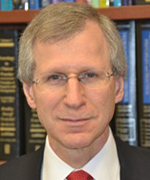 Charness, who is also chief of staff at the VA Boston Healthcare System and professor of neurology and faculty associate dean at Harvard Medical School, was honored as an outstanding alcohol researcher who has made significant and long-term contributions to understanding alcohol's effects on the body and mind.

Charness joined VA as a staff neurologist in 1989 and served as chief of neurology at the Brockton-West-Roxbury VA and the VA Boston Healthcare System from 1996 until 2003, when he became chief of staff. He serves on the Chief of Staff Advisory Committee to the VA principal deputy undersecretary for health and is VA's representative on the Chief Medical Officer Group Steering Committee of the Association of American Medical Colleges.

He is scientific director of the NIAAA-funded Collaborative Initiative on Fetal Alcohol Spectrum Disorders and chairs the external advisory board for the NIH-funded Adolescent Brain and Cognitive Development study. He has cared for patients with neurological disorders throughout his career.