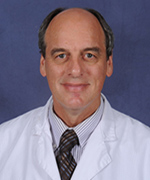 Steven Scott, D.O., will receive the Military Officers Association of America (MOAA) Distinguished Service Award in recognition of his leadership role in improving the lives of ill, injured, and disabled Veterans and their families.

Scott is the co-director of VA's Center of Innovation on Disability and Rehabilitation Research (CINDRR), chief of physical medicine and rehabilitation at the James A. Haley Veterans Hospital in Tampa, Fla., and co-clinical director of the VA Polytrauma/Blast Quality Enhancement Research Initiative.

Scott has been a researcher at the James A. Haley Veterans Hospital since 1990. He also holds positions with the University of South Florida's Morsani College of Medicine, and previously worked at the Mayo Clinic in Rochester, Minnesota.

MOAA is the nation's largest association of active duty, National Guard, Reserve, retired, and former military officers and their families. It annually recognizes individuals or organizations that strongly support the uniformed services community. Scott will receive this award on April 12, 2016, at a MOAA event on Capitol Hill.

Scott is a nationally known expert in the fields of physical medicine and rehabilitation, with research expertise in polytrauma and traumatic brain injury. Much of his work focuses on the rehabilitation and reintegration of Veterans who have experienced blast-related injuries.

For example, Scott has worked extensively on the Tampa Smart Home, a project designed to help Veterans with TBI relearn basic activities of daily living. The Smart Home is a live-in facility equipped with state-of-the-art technology that tracks patients' movement and provides interactive multimedia prompts. The automated therapy and directions provided by the Smart Home help Veterans with traumatic brain injury regain their independence in a real-world setting.

Traumatic brain injury has been called the signature injury of OIF/OEF. Scott's work on this subject has also included areas such as telerehabilitation and new screening methods for brain injury.

The president and CEO of MOAA, retired Air Force Lt. Gen. Dana Atkins, said that Scott and MOAA's other awardees have each "shown a personal commitment to supporting this nation's defense and an enduring loyalty to advocate for those who serve and their families."