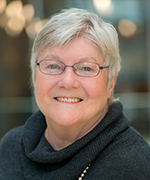 Dr. Sharon I.S. Rounds, a physician and researcher with the Providence VA Medical Center, has been selected to receive the Trudeau Medal for lifetime achievement in the prevention and treatment of lung disease. The presentation will be made at the American Thoracic Society (ATS) conference in Washington D.C., on May 21, 2017.

Rounds, who is also professor of medicine and pathology and laboratory medicine at Brown University in Providence, Rhode Island, has a long history of serving Veterans through research and clinical care. She was chief of pulmonary and critical care medicine for 23 years and chief of the medical service for nine years at Providence VA Medical Center.

She is actively involved in research and is currently supported by multiple grants from both the public and private sectors. Among her current projects are the following:

The Trudeau Medal was established in 1926 and is awarded in honor of Edward Livingston Trudeau, a founder and first president of the American Lung Association. It is given in recognition of lifetime achievement in the prevention and treatment of lung disease via leadership in research, education, and clinical care.