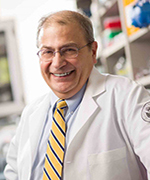 The award is given annually to VA investigators in recognition of outstanding achievements in biomedical research and contributions to cutting-edge medical care for U.S. Veterans. It is given by VA's Biomedical Laboratory Research and Development (BLR&D) Service, and is considered its highest honor.

Uncovering the cure for antibiotic resistance

Dr. Robert A. Bonomo is chief of medical service and director of the Geriatric Research, Education and Clinical Center (GRECC), a VHA Center of Excellence, at the Louis Stokes Cleveland VA Medical Center. He is also professor of medicine, pharmacology, molecular biology, and microbiology at Case Western Reserve University in Cleveland. He is considered a leader in the investigation of antibiotic resistance in Gram-negative bacteria, and is also an internationally recognized expert in the field of antibiotic resistance. His work includes, but is not limited to: susceptibility testing, genetics, protein engineering, drug discovery, and proteomics.

In 2006, Bonomo and his team published an important research paper on the spread of multidrug resistant Acinetobacter, which is a group of gram-negative bacteria, at Walter Reed Army Medical Center in Washington D.C. The paper identified the problem of drug-resistant infections in Veterans who had served in Iraq and the Middle East. The organism was first thought to have originated in Iraqi soil, but was later found to be acquired through the military evacuation chain.

"This paper gives a 'snapshot' of the complex genetic background responsible for antimicrobial resistance in Acinetobacter species from WRAMC," wrote the study authors. "Identifying genes...and defining patterns of transmission serve as a starting point for devising strategies to limit the clinical impact of these serious infections."

The Middleton Award recognizes Dr. Bonomo for his "leadership in the study of antibiotic resistance in Gram-negative bacteria, one of the greatest challenges to VA health care," said Dr. Rachel Ramoni, VA's chief research and development officer.

Antibiotic resistance is a public health crisis. Deaths resulting from bacterial resistance in the U.S. number more than 30,000 people annually.

* Read about Dr. Bonomo's recognition by the European Society of Clinical Microbiology and Infectious Disease for his lifetime contributions to the field of infectious disease, and his work with beta-lactamase inhibitors. 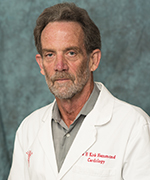 Dr. H. Kirk Hammond is a cardiologist and researcher with VA San Diego Health Care System. He is also professor of medicine at the University of California, San Diego, in La Jolla.

Hammond is noted for landmark studies in cardiovascular research that have changed the medical community's understanding of cardiovascular dysfunction. He and his team have also pioneered the use of gene therapy to treat congestive heart failure; a process whereby genetically modified cells are transported via an inactivated virus into the heart muscle.

"There is currently no treatment for heart failure with preserved ejection fraction that prolongs life," wrote Hammond, describing his latest research in gene transfer, "and few that reduce hospitalization rates for heart failure. We need new therapies to address this unmet medical need. Cardiovascular gene transfer is conceptually an attractive method for treating heart failure..."

Hammond has two late-stage clinical gene therapy trials that have been approved by the FDA and will begin in 2017:

"If successful, these trials could lead to the first registration of a gene therapy product for treating heart disease," said Dr. Ramoni. "Dr. Hammond is clearly a pioneer of inter-coronary gene therapy and novel patient delivery mechanisms that will have a broad impact on the health care of Veterans."