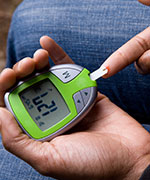 A team of VA researchers were recognized as finalists in the ECRI Institute's 12th annual Health Devices Achievement Award. Researchers from the VA Pittsburgh Healthcare System, the VA National Center for Patient Safety, and the VA Hudson Valley Health Care System were commended for their work to eliminate treatment errors stemming from the use of a particular brand of blood glucose monitor.

The researchers developed a project that included three phases to test the six display configurations available on monitor. They were an evaluation to assess ease of use, two pilot tests to evaluate materials and procedures, and a simulation study comparing two screen configurations—a numerical display and a text display. The device displays were assessed on the ability to avoid obscure error codes and limit abbreviations to those that are universally recognized, among other criteria.

During the simulation study, participants were asked to interpret the text and numerical displays and choose the appropriate treatment. The researchers found that a text display that said "out of critical range" in response to a dangerously low blood sugar reading was misinterpreted by 11 percent of study participants, who then recommended the wrong treatment. When presented with the numerical display, none of the participants made a treatment error.

Fifteen percent of study participants (66 nurses at two VA medical centers) said they were confused by the "out of critical range" text display. Researchers said this could potentially be interpreted by the provider as a "not critical" reading.

The investigators concluded that using a blood glucose monitor that used a numerical display, rather than a potentially confusing text display, could eliminate life-threatening errors. The team developed configuration recommendations for the monitor and communicated its concerns to the manufacturer. A firmware update has already been released by the manufacturer to address some of the issues that the VA team has identified.

Patients who have diabetes require frequent testing of blood glucose levels using a lancet to draw blood from a finger and a blood glucose monitor to measure blood sugar levels. Based on the device's measurements, providers make decisions on the amount of insulin or other medications to prescribe.

The ECRI Institute is a nonprofit organization that is dedicated to testing medical devices, products, drugs, and procedures to improve patient care in the United States. Each year, the institute presents a Health Devices Achievement Award to a member organization that demonstrates innovation and improvement to patient safety through health technology.