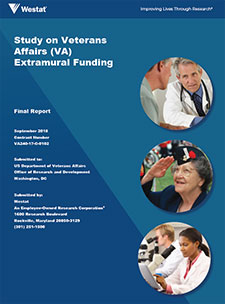 In 1988, the Department of Veterans Affairs (VA), in accordance with Public Law (P.L.) 100-322 [now codified at sections 7361-66 of title 38, United States Code (U.S.C.)], authorized the establishment of VA-affiliated nonprofit research and education corporations (NPCs) to be located near VA medical centers (VAMCs). These private, state-chartered nonprofit entities were established to provide flexible mechanisms for the administration of funds other than those appropriated to VA for the conduct of VA-approved research. Throughout this report, we refer to these funds as "extramural" since they are not part of VA appropriations. Congress later expanded the NPCs' purview to include support for VA education and training activities. The fundamental purpose of NPCs is to serve Veterans by supporting VA research and education to improve the quality of care that Veterans receive.

There are 83 independent 501(c) (3) NPCs located in 44 states, Puerto Rico, and Washington D.C. NPCs have made substantial contributions to VA research and education. Combined NPC revenues in 2016 were more than $266 million.2 To date, there have been no systematic efforts to examine the administrative and funding distribution mechanisms specific to NPCs.

VAMCs and their academic affiliates (medical schools, universities) have a long history of collocation and collaboration predating the establishment of NPCs. Many researchers employed at the VA also have an academic appointment at the affiliated medical school and university. To standardize terminology used in this report, we refer to these researchers as "dual appointed VA investigators" or "VA principal investigators" (PIs). We recognize that many, if not most, dual appointed VA investigators are also university faculty and that affiliates may not use or recognize the term "VA PI." We use the term for convenience in this report, and it also includes VA researchers who may have no academic appointment. VA researchers, with or without an academic appointment, frequently apply for funding from extramural sources, such as other federal agencies, including the National Institutes of Health (NIH) or the Department of Defense (DOD), from private industry, or from foundations and non-profit agencies such as the American Cancer Society.3 VA researchers may conduct extramurally funded projects at the VAMC and/or the affiliate, and the funds may be administered by the affiliate or the NPC, or both, through the use of subawards. A subaward is a mechanism similar to a subcontract, in which the organization awarded the grant (i.e., the prime) commits a portion of the funding to the subawardee in exchange for management and performance of a share of the work.

The objective of the current study is to assess how the NPCs and affiliates meet the needs of VA, and to determine areas that can be strengthened to improve research productivity and quality to benefit VA and Veterans' health. This report provides a broad and comprehensive understanding about the administration of extramural research funds; how stakeholders report making grant submission and administration decisions; the relative benefits and shortcomings stakeholders attribute to the academic affiliates and the NPCs in facilitating VA research and education; and how stakeholders believe the administration of extramural funds benefits Veterans and the mission of VA.

Specifically, the VA Office of Research and Development (ORD) tasked Westat with gathering the answers to the following questions:

1. What is the purpose of the VA NPCs?


a. Please provide summaries from the statute and VHA Handbooks to clearly define how NPCs are to be utilized.
b. Are the VA NPCs being utilized to their fullest potential?

2. Who makes the decision as to where a grant will be administered?


a. What is the local VA policy for the administration of a federal grant involving one of its employees?

3. How are the NIH grant funds administered?

a. If the majority of the work (i.e., greater than 50%) is done at the VA, does the NPC administer the funding?

4. How much research supported by NIH grants is being conducted solely at the VAMC, and how much is spent in collaboration with the university?

5. How many of the NIH-granted funds are spent solely at the VA?

a. How much is spent in collaboration with the university?
b. Is the NPC a subcontractor on work done at the VA?

6. When funding is received at the university, where is the research being conducted?

a. What kinds of research are being conducted?
b. How many of the research projects conducted at the university use a majority of Veterans as subjects?


7. Is there a policy directing VA investigators with dual university appointments which institution should serve as the grant institution?

8. What is the academic affiliate's policy for the administration of a federal grant involving one of its employees when the research is being performed at the VA?

a. Do the academic affiliates comply with all VA regulations and policies?
b. Are they held to the same standards as the VA NPCs?
c. Do these two policies conflict with one another?
d. Does it cause a conflict for the employee?
e. Who manages or resolves this conflict?

9. How does VA benefit when federal grants are administered by the local academic affiliate?

a. How does the academic affiliate use the indirect fee to benefit VA?

10. What support does the NPC and the university provide to the investigators who submit grants to NIH or other Federal agencies?

11. Does the nonprofit corporation have an explicit education mission in its bylaws?

12. Does the nonprofit corporation have the Associate Chief of Staff for Education as a statutory board member?
YES or NO


13. What percent of grants/contracts are explicitly for education activities?