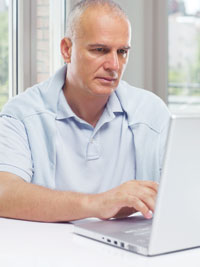 "I was a fighter jet mechanic in the military. I could handle 20 some-odd jets on an hour turn time with people screaming at that they needed their stuff done yesterday. I used to be able to struggle with a part for hours, in the freezing cold, again with people screaming at me some more, and not really feel the stress. Yes, there was stress. But possibly it was the 'good' stress that people talk about. Now, something goes a little wrong and I flip out and get angry, and anger leads to not thinking straight, and not thinking straight leads to rage! It just isn't a good thing for anyone involved..."

The former Air Force staff sergeant who wrote the words above, part of a blog post on the Web site notalone.com, is one of thousands of Iraq and Afghanistan Veterans who are expressing their feelings and struggles in writing—some publicly on the Web, in writing groups, or in published books; and others in the privacy of their own journals.

Now, VA researchers are studying the power of expressive writing to help Veterans readjust. More than 1,000 Veterans nationwide have taken part in a study based at the Minneapolis VA Healthcare System. The study is the largest yet on expressive writing.

The researchers, led by Nina Sayer, PhD, are assessing the impact of writing on posttraumatic stress, social support, physical health, life satisfaction, and other outcomes.

The Iraq and Afghanistan Veterans in the study, recruited through VA and Department of Defense sources, are randomized to either expressive writing or one of two "control" activities. One control group is asked to write factually about the information needs of new Veterans. The other is not given any writing assignments.

The writing participants visit a Web site where they receive instructions and write for at least 20 minutes, on up to four separate days within a 10-day window. For the expressive writing group, the topic is their reintegration challenges, the transition from soldier to civilian. They are asked to "write about their deepest thoughts and feelings around the topic," says Sayer, and to not worry about grammar and spelling.

Past studies on expressive writing have shown its therapeutic value for people with various health conditions and adjustment problems. But this is the first time the approach has been studied specifically as a way to help Veterans cope with reintegration. To make the therapy as accessible as possible, the researchers created a Web site where the Veterans could do their writing.

Expressive writing can stand alone as a therapy, or potentially work as an adjunct to other treatment, such as psychotherapy, says Sayer. She says some Veterans may think about starting psychotherapy as a result of their writing, and some may bring issues from their writing into their therapy sessions.

"It could be that for some people, the experience of writing about their reintegration issues may lead them to think about trying therapy, when they hadn't thought about doing so before," notes Sayer.

To help create a therapeutic writing experience for participants, the writing samples, all done online, are not shared with anyone. Sayer's team, however, does review them for safety concerns, such as violent or suicidal thoughts. When appropriate, the team reaches out directly to Veterans to try to connect them with the help they need, or refers the writing samples to a clinician outside the research team for possible follow-up with the Veteran. The writing Web site itself also offers referral information.

"We have over 2,500 writing samples at this point," says Sayer, "and there were only about a dozen we flagged and followed up on in one way or another." She says they have not had to do a "warm transfer" to VA's suicide hotline team, or summon the police to a Veteran's home, though they are able to take such actions in extreme cases.

While the researchers don't anticipate dramatic impacts from the writing intervention, they do expect positive results. The key, they point out, is that expressive writing is a low-tech, low-cost activity that Veterans from all backgrounds can easily access.

"It has the potential help a large number of people, even if the effect is small to medium," says Sayer. "Because of this reach to a wide population of Veterans, it could make an important difference."