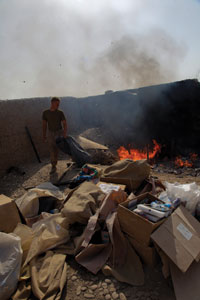 Analyzing the military and health records of nearly 23,000 Iraq and Afghanistan Veterans, researchers with VA and the Department of Defense found little evidence of a higher risk of respiratory problems among those who served near burn pits. The analysis was part of the large, ongoing Millennium Cohort Study (MCS). The investigators looked for links between service within two, three, or five miles of known burn pits and new cases of bronchitis, emphysema, asthma, and other breathing problems. The Service members and Veterans in the study had served with the Army or Air Force and were surveyed during 2004 to 2006 and again during 2007 to 2008. Increased symptoms were seen among those who served within two miles of Joint Base Balad in Iraq, but the finding was statistically weak and no trend was apparent. Last year, the Institute of Medicine found inconclusive evidence of a link between burn pits and long-term respiratory problems but recommended further study. VA is continuing to look at the issue and is hosting a scientific conference, along with Defense, on Aug. 21-23 for government and academic experts to review scientific and medical evidence and consider approaches to diagnosis, exposure assessment, care, surveillance, and research. The meeting is part of a broader VA-DoD action plan on the issue. For more information, visit www.publichealth.va.gov/exposures/burnpits/index/asp. (Journal of Occupational and Environmental Medicine, June 2012)