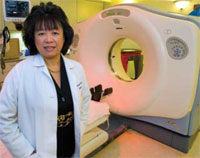 Computed tomographic colonography (CTC)—or virtual colonoscopy—administered without laxatives is as accurate as conventional colonoscopy in finding potentially cancerous polyps, according to a study by the San Francisco VA Medical Center, the University of California, San Francisco, and Massachusetts General Hospital.

"The use of laxatives is often viewed as the worse aspect of having not only a virtual colonoscopy but an optical colonoscopy," says co-author Judy Yee, MD, chief of radiology at the San Francisco VA and vice chair of radiology at UCSF. "I hope this research will encourage patients who have delayed screening for colon cancer to be examined with this less invasive method."

The study involved 605 patients overall, including Veterans at the San Francisco VA. The two colonoscopy methods used in the study showed about the same effectiveness in finding polyps six millimeters or larger in size, which are more likely than smaller polyps to harbor cancer.

Virtual colonoscopy is approved by the American Cancer Society as a valid screening test for colorectal cancer. It uses a CT scanner to hunt for cancers and polyps in the colon noninvasively. In standard optical colonoscopy, a physician inserts a six-foot-long scope into the entire colon. One plus of this method is that if worrisome polyps are found, they can be removed during the same procedure—something that is not possible with the virtual alternative. Currently, both methods call for patients to take a bowel-cleansing laxative before the procedure.

With laxative-free CTC, patients do not have to go through bowel cleansing before the exam. Instead, they begin a low-fiber diet two days before the test. They also ingest a tagging agent the day before. The agent mixes with residual material in the colon and can then be identified and removed digitally when radiologists interpret the scans.

Yee notes that further research is needed on the laxative-free procedure before it can be deployed on a wide scale.

The study results appeared May 15 in the Annals of Internal Medicine.