Loss of sense of smell may warn of Parkinson's 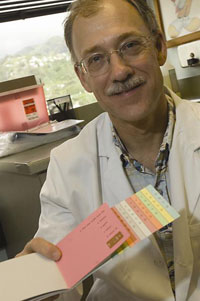 A team led by G. Webster Ross, MD, at the Honolulu VA Medical Center found that impaired olfaction (sense of smell), constipation, slow reaction time, excessive daytime sleepiness, and faulty executive function may all warn of Parkinson's disease and increased likelihood of either Lewy bodies (abnormal protein clumps found in Parkinson's) or the loss of neurons. The study found that combinations of these signs—which could appear well before any movement-related symptoms—could predict up to a tenfold higher risk of the disease.

The findings were presented at the World Congress on Parkinson's Disease and Related Disorders in early December.

While tests of these functions would need to be used in conjunction with other tests, partly because of their low "specificity" (they could also predict any number of other conditions), "these methods may be useful for identifying a high risk group for participation in intervention trials aimed at preventing or slowing the progression of Parkinson's disease," say the researchers.

They based their analysis on data from the Honolulu-Asia Aging Study, a prospective study of neurodegenerative and cerebrovascular diseases in about 8,000 Japanese-American men who were born between 1900 and 1919. Starting in 1965 and continuing some 40 years, researchers collected data on health conditions, environmental and lifestyle factors, and physical characteristics. Autopsies were conducted on some of the men after their death. In this new VA analysis, the researchers identified those men who developed Parkinson's disease and sought to track which factors may have been early signs of the condition, before motor symptoms appeared.