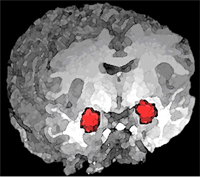 In this 3-D MRI image, the amygdala is shown in red. Researchers with VA and Duke University have linked the brain area to PTSD.

Recent combat veterans with posttraumatic stress disorder have less volume in an area of the brain critical that is critical in fear and anxiety responses, say researchers with VA and Duke University.

The scientists say their finding, published Nov. 1 in the Archives of General Psychiatry, is the first clear evidence that smaller amygdala volume is associated with PTSD, regardless of the severity of trauma. But there's still a chicken-or-the-egg question: Is the physiological difference caused by a traumatic event, or does PTSD develop more readily in people who naturally have smaller amygdalas?

"Researchers found 20 years ago that there were changes in volume of the hippocampus associated with PTSD, but the amygdala is more relevant to the disorder," said lead author Rajendra Morey, MD, MS. "It's associated with how fear is processed, especially abnormal fear processing." Morey is a psychiatrist with Duke and the Durham VA Medical Center.

Scans find differences in both hippocampus and amygdala

The researchers enrolled 200 combat veterans who served in Iraq and Afghanistan. Half had PTSD and the other half had been exposed to trauma but not developed the disorder. Amygdala and hippocampus volumes were computed based on MRI scans.

The scans linked PTSD with smaller volume in the amygdala on both sides of the brain. They also confirmed previous studies linking the disorder to a smaller left hippocampus.

Morey: "The next step is to try to figure out whether a smaller amygdala is the consequence of a trauma, or a vulnerability that makes people get PTSD."

He has a theory. The study found that amygdala volume, while linked to PTSD, is not affected by trauma severity, frequency, or duration. This suggests there is no cause-and-effect relationship between trauma and amygdala volume. Rather, it appears likely that people with measurably smaller amygdala to begin with are susceptible to PTSD. But more studies are needed to make that determination.

"This is one piece in a bigger puzzle to understanding why some people develop PTSD and others do not," Morey said. "We are getting closer to that answer."