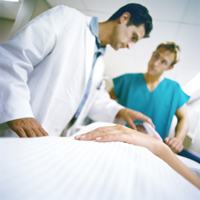 More than 100 medical interns and residents took part in a study at the Philadelphia VA and University of Pennsylvania to test the feasibility and outcomes of protected sleep periods for medical trainees in hospitals.

A study at the Philadelphia VA Medical Center and the Hospital of the University of Pennsylvania found that interns who were allowed to sleep up to five hours during long shifts showed greater alertness in the morning. The study tested the workability of 2009 recommendations from the Institute of Medicine calling for protected sleep for medical trainees in hospitals. In 2011, new policies limited shifts to 16 hours for trainees in their first year after medical school, and 24 hours for trainees thereafter. But medical trainees often work these shifts with little if any sleep. The study used sleep diaries and "actigraph" watches, with light and motion sensors, to verify sleep and activity patterns. During the protected-sleep periods, interns were encouraged to sleep in a bed in a dark, quiet room. They had to hand over their cell phones. The study found that the arrangement worked. While interns typically didn't sleep the whole five-hour period, they did average about an hour more of sleep per shift. And they were able to get in three straight hours of shut-eye twice as often as those not given protected sleep. Although the better-rested interns scored higher on alertness tests the next morning, the study found no difference in patient outcomes that were attributable to the study intervention. (Journal of the American Medical Association, Dec. 5, 2012)