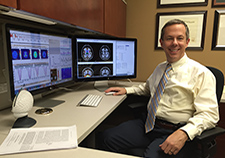 Size may not matter in a lot of things, but when it comes to cognitive decline, the size of the hippocampus definitely seems to be an issue.

The hippocampus is an area of the brain that plays an important role in memory and spatial navigation.

But, according to new research from Duke and Vanderbilt universities, along with the VA Tennessee Valley Healthcare System, there may also be genetic factors that directly affect hippocampus size.

Effects seen on right side of hippocampus

The study, which followed a group of older adults four years, found that variants in a gene responsible for regulating blood pressure and commonly tied to late-life cardiovascular problems may also cause shrinking of the hippocampus. The results appeared online Aug. 15, 2014, in the American Journal of Psychiatry.

The researchers zeroed in on three variants of the AGTR1 gene, which is part of the renin-angiotensin system, or RAS. RAS is a hormone system responsible for regulating blood pressure and fluid balance.

The variants were associated with greater changes in hippocampal volume, and with memory problems. The shrinkage occurred only in the right hippocampus; the left side was unaffected. Each side of the structure handles somewhat different functions, with the right side relating more to navigation.

These effects were in addition to changes related to the APOE genotype, the primary genetic risk factor for the development of Alzheimer's disease.

"These disorders result from complex interactions among multiple genes and environmental influences, which makes identifying the relationships between single genes and other symptoms extremely challenging," says Dr. Warren Taylor, director of the Mood Disorders Program at Vanderbilt University's Center for Cognitive Medicine. He is also a psychiatrist in VA's Geriatric Research, Education, and Clinical Center in Nashville.

For the study, researchers looked at gene variants in 138 participants, all of them 60 years of age or older. The participants were then separated into two groups based on whether they met the clinical criteria for major depression. The researchers conducted neuropsychological testing at the start of the study and then annually for four years. They also conducted DNA genotyping and measured hippocampal size with an MRI.

"Variants in the RAS could heighten the risk for developing dementia by accelerating age-related changes in the brain," says Taylor, such as hippocampus shrinkage.

Basically, the increase in blood pressure and stress would put the brain at a higher risk. Although this might affect both sides of the brain and hippocampus, Taylor and his team observed the effects only in the right hippocampus. "Each side of the hippocampus may have somewhat different functions in managing stress," says Taylor. "It doesn't mean that blood pressure or stress doesn't affect the left hippocampus â€“ it might. We just didn't observe it in this study."

The link between physical, mental health

According to Taylor, hippocampal asymmetry—basically, when one side of the hippocampus is bigger than the other—has been observed in patients with severe depression and in relatives of patients with depression, meaning it's possibly passed down genetically, and that the RAS gene variant may also be passed from parent to child.

"Often we tend to think of cardiovascular health in terms of physical symptoms," says Taylor, "but the role of the cardiovascular system, and in particular blood pressure, extends to the brain and mental health as well. That's important to remember."

Taylor hopes the gene variant can serve as a biomarker for future risk of memory loss or depression, and perhaps other psychiatric diseases. Ideally, it will also provide clues to guide new treatments.