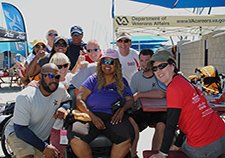 Veterans enjoy each other's company during VA's 2013 Summer Sports Clinic. New VA research suggests that while social support can help in PTSD prevention and management, it may not play a significant role in influencing people to seek treatment. (Photo courtesy of VA Summer Sports Clinic)

Veterans enjoy each other's company during VA's 2013 Summer Sports Clinic. New VA research suggests that while social support can help in PTSD prevention and management, it may not play a significant role in influencing people to seek treatment. (Photo courtesy of VA Summer Sports Clinic)

When it comes to posttraumatic stress disorder, strong social support can often mean the difference between recovery and deterioration. Research has consistently shown that a person's social network— that is, the people he or she can rely on—can play a mitigating role in both PTSD development and severity.

It stands to reason, then, that people with PTSD and strong social networks would be more likely to seek treatment and get help. But new research suggests that might not be the case.

A study published in Psychiatric Services on Oct. 1, 2014, suggests that social support, on its own, has little impact on whether someone with PTSD chooses to seek treatment. More important are the severity of the PTSD; demographic factors like age or marital status; and whether the patient has any other illnesses.

Study based on more than 2,800 people with PTSD

"This isn't about developing PTSD," says Dr. Rebecca Sripada, a postdoctoral fellow with VA's Serious Mental Illness Treatment Resource and Evaluation Center and the University of Michigan. "We know that lack of social support is associated with an increased likelihood of developing PTSD and with greater severity of PTSD symptoms. What we weren't sure of was how that translated to care. Does having good social support lead individuals with PTSD to seek care?"

For the study, Sripada selected a sample of more than 2,800 people with PTSD from the National Epidemiologic Survey on Alcohol and Related Conditions. In the survey, participants rated their social support on a 12-point scale by indicating their agreement with statements such as, "If I were sick, I know I would find someone to help me with my daily chores," or, "If I wanted to go on a trip for a day, I would have a hard time finding someone to go with me."

Sripada calculated the association between level of social support and the likelihood of receiving treatment for PTSD, and adjusted for sociodemographic information. Sripada says sociodemographic factors appeared to play a significant role.

"Traits like age, household income, marital status, geographic region, and race did play a part in whether or not a patient sought treatment for PTSD," she says. Traits linked to a greater likelihood of seeking treatment included having higher education or greater income; being divorced, separated, or widowed; and having greater PTSD severity.

Interestingly, because one of the symptoms of PTSD is withdrawal, symptom severity may adversely impact social support. So worsening PTSD symptoms may result in diminishing social support.

In any case, say the researchers, understanding the role of family, neighbors, and peers is integral to helping Veterans with PTSD manage their symptoms, and to improving treatment rates.

"PTSD is treatable," Sripada says, "and social support is such an important resource. The key is to mobilize them [family members or friends], to educate them, so that they encourage their loved ones to get needed care."