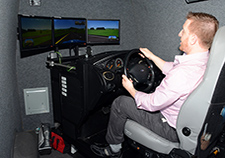 Nicholas Bartolomeo, who served three tours with the Marines in Iraq and now works at VA's Center of Innovation on Disability and Rehabilitation Research in Gainesville, Fla., demonstrates a driving simulator used in research at the center. (Photo by Greg Westlye)

Nicholas Bartolomeo, who served three tours with the Marines in Iraq and now works at VA's Center of Innovation on Disability and Rehabilitation Research in Gainesville, Fla., demonstrates a driving simulator used in research at the center. (Photo by Greg Westlye)

Just inside the main gate at Fort Campbell, Ky., home of the Army's famed 101st Airborne Division, is a large sign counting the days between fatalities. Reach 101 death-free days, and the soldiers receive a day off. But these aren't combat fatalities. The sign is counting motor vehicle accidents, and unfortunately, the days off are few and far between.

"Motor vehicle accidents are a leading cause of death and disability in U.S. military populations," says Dr. Katherine Hoggatt, a research health scientist at VA's Greater Los Angeles Center for the Study of Healthcare Innovation, Implementation, and Policy. "And recently deployed soldiers and Veterans may have particularly high rates of risky driving."

The soldiers in the 101st receive post-deployment training on risky driving, as well as safety briefs and near-constant reminders about the hazards they face on the road. The Army even distributes a brochure titled "Post-Combat Driving: The American Road." The brochure includes a self-assessment, statistics on risky driving among returning soldiers, and mitigation techniques based on the recommendations of fellow soldiers.

But not every soldier returning from deployment has such a robust support system. "There haven't been many studies into risky driving behavior among National Guard soldiers and reservists," says Hoggatt, also an adjunct assistant professor at UCLA. "They've played a large role in active military operations and may actually be at greater risk of deployment-related stress and mental health problems than their active duty counterparts."

Hoggatt and her colleagues set out to research risky driving behavior and its relationship to mental health conditions and deployment-related trauma among members of the Ohio Army National Guard. The findings appear in the Jan. 2, 2015, issue of the journal Traffic Injury Prevention.

The study included data from 2,616 Ohio Army National Guard soldiers who answered questions such as:

Responses to these and a handful of other questions were then analyzed against combat-related trauma, PTSD, alcohol and drug use, and other mental illnesses. Overall, 12 percent reported rarely using a seatbelt or drinking and driving in the last 30 days, 25 percent reported disregarding speed limits, and 26 percent reported passing cars on the right often.

Deployment to a conflict was associated with an increased rate of drinking and driving, passing on the right, running red lights, and ignoring seatbelts. Although there was some variability, these risky driving behaviors were more common for Veterans with exposure to a greater number of deployment-related traumatic events.

"There are several theories for why Veterans may engage in risky driving after deployment to conflict areas," says Hoggatt. "One is that they're continuing learned driving behaviors that were actually helpful in combat situations. Another is that they might be predisposed to risky behavior, as evidenced by their volunteering for combat-related jobs in the first place, or they may be recreating feelings experienced in high-stress combat environments. Risky driving might also be a consequence or expression of other mental health conditions that are exacerbated after deployment."

Hoggatt believes more research is needed to understand the effect of deployment on risky driving across different military populations. At the same time, there are already initiatives to address risky driving among Veterans.

"VA and the Defense and Transportation departments have developed driving programs tailored for a young military audience, and VA researchers can do further testing to see how we can get the message to soldiers as early and effectively as possible," says Hoggatt. "We pay a lot of attention to various mental health consequences and hazards for soldiers returning from combat—risky driving is a big one, but it can be prevented."

VA, University of Florida use simulators to study effects of TBI, PTSD, depression on driving

In 2009, VA announced that motor vehicle accidents were the primary cause of death for recently returned Veterans. To help reduce the number of driving fatalities, researchers across VA have studied a number of variables, from posttraumatic stress to increased drinking.

Now researchers at the North Florida South Georgia Malcom Randall VA Medical Center, in conjunction with the University of Florida, plan to study the effectiveness of a new occupational therapy driving intervention program on Veterans with TBI, PTSD, or depression. The study will use the DriveSafety CDS-250 simulator mounted in a Dodge Sprinter van and focus on Veterans with mild traumatic brain injuries.

Considered the hallmark injury of the wars in Iraq and Afghanistan, traumatic brain injuries have been found to have a variety of long-lasting and often subtle effects on Veteran health. Unfortunately there is very little research on how TBI can affect future driving behavior or how those with certain injuries respond to traditional traffic safety education.

The study is an extension of earlier research conducted in Gainesville with the STISM M500W fixed-base driving simulator. It compared the driving habits of 18 post-deployment combat Veterans with those of 20 participants who had no combat experience. In that study, combat Veterans made more critical driving errors than their peers, particularly when it came to reckless behavior such as speeding.