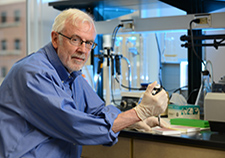 Dr. Howard Pratt, with VA and Indiana University, is studying how greater sensitivity to a certain hormone may help account for blacks' higher rates of hypertension. (Photo by Tim Yates/Indiana University)

Dr. Howard Pratt, with VA and Indiana University, is studying how greater sensitivity to a certain hormone may help account for blacks' higher rates of hypertension. (Photo by Tim Yates/Indiana University)

Compared with whites, blacks are at a greater risk for a more severe form of hypertension and have higher rates of complications. They retain more sodium, have higher blood pressure, and, in the end, suffer the health consequences.

"End stage renal disease may be up to 10 times more frequent in blacks than whites with hypertension," says Dr. Howard Pratt, a professor of medicine at Indiana University and former associate chief of staff for research at the Roudebush VA Medical Center in Indianapolis. "Stroke risk is approximately five times greater among blacks with hypertension. Hypertension is a major public health issue for blacks."

One reason why blacks may be at higher risk is that their kidneys retain sodium more readily than whites. This may be a leftover adaptation to the African climate, where sodium and water losses were excessive and not easily replenished from sources within the environment. Less well-known are the specific mechanisms within the kidneys that lead to sodium retention and increases in blood volume and blood pressure.

To help answer these questions, Pratt and his colleagues set out to study the effect of aldosterone, a natural steroid that is the body's main sodium-retaining hormone.

With VA and NIH funding, they studied the relationship of the plasma aldosterone level to blood pressure. They did so first in a group of more than 500 black and white children, 221 of whom completed additional tests after reaching adulthood, some 20 years later.

The results, published in Hypertension in June 2014, showed that blood pressure in blacks was significantly associated with the plasma aldosterone concentration in both the children and the adults, but only in blacks. In short, for blacks, the more aldosterone in the body, the higher the blood pressure.

According to Pratt, the results provide a more complete picture of the role of aldosterone as a regulator of blood pressure.

"We now realize that a 'normal' or even a 'low' level of aldosterone may contribute to the development of hypertension in blacks. This leaves us with a distinct target for drugs that mitigate the actions of aldosterone," says Pratt. "Attacking aldosterone sensitivity could impact on the prevention of stroke, renal disease and heart disease in blacks."