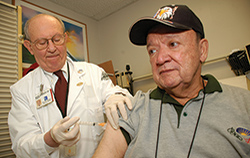 For exhausted hospital and medical workers, there are times when flu season can seemingly last forever. Now, with flu season upon us, researchers have developed a new algorithm that could help predict the beginning of influenza season and, ideally, bring efficiency to bear on the seasonal scourge.

Researchers with VA, the University of Massachusetts at Amherst, Johns Hopkins University, and other institutions in Colorado, Florida, and New York developed a method that hospitals and public health officials can use to determine the earliest stages of flu season, what the researchers call "community-level onset." The research was funded by VA and the Centers for Disease Control and Prevention. Having the information could help public health officials and hospitals preserve resources while combatting the virus.

The results were published online Nov. 19, 2014, in the journal Clinical Infectious Diseases.

"All the extra precautions cost time and money, so you don't want to declare flu season too early," said biostatistician Nicholas Reich in a press release put out by the University of Massachusetts at Amherst. "For hospitals, there is a strong incentive to define a really clear period as flu season. It does not start the moment you see the first case in the fall. If you begin the full response too early, you set yourself up for a long slog and too much effort will be spent on too few cases. You want to be as effective and efficient as possible in your preparations and response."

That cost can come in the form of extra precautions and procedures, such as added gloves, masks, gowns, special decontamination procedures and more, all of which can have a significant financial impact.

"It's a terrific tool," says Dr. Michael Simberkoff, chief of staff at the VA New York Harbor Healthcare System, who worked on the study. "Right now, for example, the influenza virus is prevalent in many areas of the country, but it isn't in the New York area. This tool really tells you when to be concerned and when not to be."

The algorithm, which researchers called the Above Local Elevated Respiratory Illness Threshold (ALERT), does not require health care workers to collect new data. Rather, it uses routine information, such as the number of influenza cases confirmed per week in a region.

For the study, researchers used data collected from 2001 to 2011 to create the algorithm. They then tested it during the 2011-2012 and the 2012-2013 flu seasons at both the Johns Hopkins Children's Center and the Children's Hospital of Colorado.

ALERT takes a region's flu history into account and allows users to identify a threshold number of cases per week to signal the start of the season. Based on that information, the tool then identifies a window when influenza outbreaks are likely to be elevated.

Also useful for other diseases

And though ALERT will mean cost-savings to hospitals and communities, health care workers should also find relief in the tool. "It's a lot to ask of health care workers to continue these important preventative measures when they just aren't seeing a lot of flu around their workplace," Reich said. "Your staff can have a sense that it will not go on forever, but that for the next 11 or 12 weeks, for example, you'll be taking the extra precautions."

According to Simberkoff, also a professor of medicine at New York University, tracking the flu is just one of the tool's capabilities. "You can use it to predict any disease that public health authorities want to track. We use it for the influenza virus because it's the most obvious, but there are plenty of other infectious diseases that occur predictably every year. You could use it to predict West Nile virus or any number of infectious diseases."