A walk a day may keep the Parkinson's symptoms away 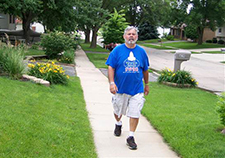 Experts agree exercise is good for Parkinson's patients. But they are still studying how much is needed, and in what forms, to achieve significant results.

In a new study by VA researchers and colleagues, patients who walked briskly for 45 minutes, three times a week, showed improvements in their Parkinson's symptoms. They were also less depressed and less tired.

"The results suggest that walking may provide a safe and easily accessible way of improving the symptoms of Parkinson's disease [and improving quality of life]," says study leader Dr. Ergun Uc, a neurologist with the Iowa City VA Health Care System. He is also an associate professor of neurology and neuroscience at the University of Iowa Carver College Of Medicine.

Previous research has suggested exercise could improve the symptoms of Parkinson's, and doctors do often advise patients with the disease to exercise. Common choices include walking, jogging, dancing, or bicycling. The key is to ensure the activity is moderately strenuous.

According to Uc, the new study shows that even moderate walking can make a significant difference.

Parkinson's disease is a chronic movement disorder. Classic symptoms involve a tremor, stiff limbs, slowness, and gait and balance problems. There is no known cure. According to the Centers for Disease Control and Prevention, Parkinson's is the 14th leading cause of death in America. The CDC estimates between 500,000 and 1.5 million Americans currently live with Parkinson's.

Parkinson's disease gained wide attention when celebrity Michael J. Fox was diagnosed with it in 1991. More recently it was revealed that prior to his death, comedian Robin Williams had also been diagnosed with Parkinson's.

The disease is most common in people over 50. Though researchers suspect genetics may play a role, it is unclear exactly what causes the disease.

For the study, researchers recruited 60 participants with mild to moderate Parkinson's. All of the patients could walk without a cane and had no other major health problems. The participants walked for 45 minutes at an average of 2.9 miles per hour, three times a week for six months. The sessions began at 15 minutes and gradually increased to 45 over six to eight weeks.

Theories on why exercise works

Of the 60 participants who started the study, 49 completed it. Only three of those who quit did so for reasons related to the exercises, such as knee pain. For those who did complete it, the results were encouraging. "We observed 7 to 15 percent improvement in various symptoms," says Uc.

Participants' motor function and mood improved by 15 percent, on average. Tiredness was reduced by 11 percent, and attention and response control improved by 14 percent.

Uc suspects the improvements could be due to any of a number of factors, such as an improvement in the brain's neuroplasticity as a result of exercise, increased oxygenation and metabolism, or an increase in dopamine, a neurotransmitter. Parkinson's involves a loss of dopamine-producing cells in the brain.

While Uc cautions that exercise and medication work in different ways and should not necessarily be compared, he does believe exercise can play a role in treating Parkinson's disease.

"Aerobic walking may represent an accessible, low-risk supplemental treatment for fatigue and depression, and [a way to] improve quality of life in Parkinson's disease," he says. "If patients are in good enough health to exercise, even moderately, they should."